Armenians in Turkey praise Erdoğan's courage, others surprised and confused 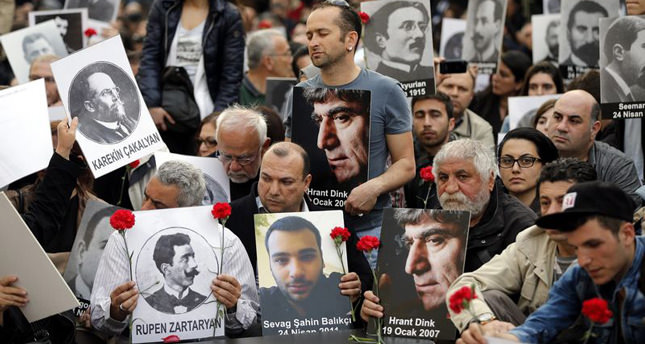 by Yusuf Selman İnanç Apr 25, 2014 12:00 am
ANKARA — Prime Minister Recep Tayyip Erdogan's statement on the 1915 incidents, delivering his condolences to the victims' families and stating that he shares the pain, have echoed strongly in the world. In many non-Turkish media outlets, it was considered surprising to hear such a statement from Turkey's prime minister. In the statement released earlier on Wednesday, Erdogan underlined the "shared pain" endured during World War I and expressed his condolences to the grandchildren of Armenians who lost their lives "in the context of the early 20th century."

The website of the German daily Tagesspiegel said it was the first time that a Turkish leader had delivered such a statement, but stressed it was not an official apology. It also emphasized that the prime minister's announcement was released in Armenian and called it an "extraordinary step." The website of the Süddeutsche Zeitung daily said the statement was "surprising."

German national broadcaster Deutsche Welle commented that Turkey has extended its hand to Armenia and named the statement an "unusual gesture."

Meanwhile, the France 24 channel said such a statement was "very rare and something that should be underlined."
The Le Monde French daily said it was the first time that Erdogan had talked explicitly about the 1915 incidents, while the Le Parisien daily called the step a "political earthquake."

The Washington Post wrote that Erdogan's condolences were "remarkable," as the events of 1915 have been spoken of very little. The Wall Street Journal said Erdogan delivered a "conciliatory" and unprecedented message, as the 100th anniversary of what the newspaper called the "Armenian Genocide" approaches next year. ''Erdogan reiterated a long-held Turkish position that the deaths of millions of people during the violence of the period should be remembered without discriminating as to religion or ethnicity,"

Reuters reported. The Guardian newspaper said the events of 1915 have caused an "unpleasant" dispute between Turkey and Armenia.
Turks and Armenians (residing in Turkey) were not surprised with the statement as they have been observing the improvements in Turkey's stance on human rights, democracy and its policies, shedding the previously established highly nationalist approach to the country and region's history.

A prominent Armenian intellectual residing in Turkey, Markar Esayan, said: "My family and I have praised the statement. Erdogan's words made us really happy. It was a historic day for us." Touching on the differences between the diaspora and Turkish Armenians, Esayan said, "Armenians living in Turkey are aware of the change and the reforms.

They demand more reform and democracy as the Turks do. They can make a comparison between Turkey's previous approach to the 1915 incidents and the changing stance in the Justice and Development Party's (AK Party) era."

He added, "The diaspora left Turkey 99 years ago. They may not see the change as clearly as Turkish Armenians.

Yet, Turkey must admit that the diaspora will adapt itself to this change as time goes by." He also underlined the difference between officials of the diaspora, including lobbies and foundations, and ordinary people. "My friends and relatives that I spoke to were so happy on Wednesday," he added.
The Armenian Archbishop in Turkey, Aram Atesyan, supported Prime Minister Erdogan's condolences on Thursday, describing the message as an "exiting" and "historic" move. "The prime minister's speech and attitude relieved the Armenians' grievances,"
Atesyan said. "This statement is a true response to those who are against Turkey's peace process," he added in appreciation on behalf of himself and the Patriarchate. "I'm sure the statement is an important step to build up new friendship bridges in the future,"
Atesyan stated. The Archbishop said it's the first time a high-ranking government official made such a statement in Turkey.
Dikran Gülmezgil, head of the Armenian community foundation Karagözyan, said "Mr. Prime Minister's attitude to Armenian citizens was quite positive, and his latest statement satisfied us. God bless the Turkish PM." Gülmezgil added that the statement will positively affect the 1915 process, and it may moderate the diaspora's negative stance. The Armenian Patriarchate released a statement yesterday, expressing its pleasure with the Prime Ministry statement. In the text, the Prime Ministry statement was described as a significant milestone for building a bridge between the Turkish and Armenian nations. It also noted: "Mr. Erdogan's statement has opened a new page in the two nations' relations.
We as the Armenians, citizens of the Turkish Republic, believe that the day when Turkish and Armenian people's pain stops is coming."
Orhan Dink, brother of prominent Turkish-Armenian intellectual and journalist Hrant Dink who was murdered in 2007, told the U.K.-based newspaper The Guardian: "Today's message of condolence is a very important step. If democracy is to be built in Turkey, this is one of the most basic bricks to do so. Both for Armenians in Turkey and for me, it is important that the prime minister of the Republic of Turkey made such a statement. Some might say that it came late, but the important thing is that this first step was made. This step has to bring both societies toward normalization."
Despite Turkey's efforts and Turkish Armenians' positive response to the prime minister, the diaspora preferred to repeat previous allegations. Armenian National Committee of America (ANCA) Executive Director Aram Hamparian said Turkey was highly isolated over its approach to the 1915 incidents, pointing out, "Ankara is repackaging its genocide denials. The fact remains that, as this cold-hearted and cynical ploy so plainly demonstrates, Turkey is, today, escalating its denial of truth and obstruction of justice for the
Armenian genocide."