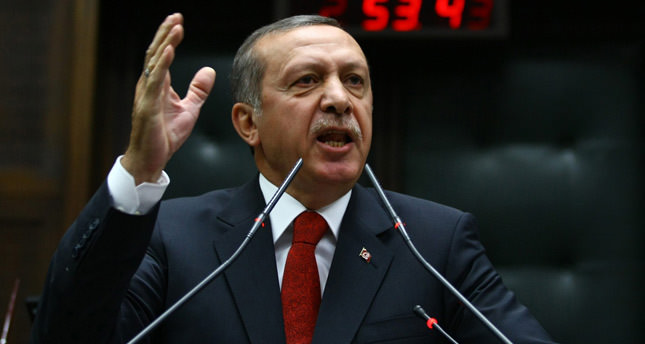 by Daily Sabah Apr 25, 2014 12:00 am
ANKARA — Turkish Prime Minister Recep Tayyip Erdoğan's historic message on Wednesday to the grandchildren of Armenians who lost their lives during the 1915 incidents, on the eve of the 99th anniversary of the incidents, has received extensive media coverage both in Turkey and across the world. Opposition parties in the Turkish Parliament, the EU and the U.S. commented on Erdoğan's message and while it is welcomed by the international community and Turkish citizens to a large extent, Erdoğan's condolences have been met with an array of reactions by certain groups. The EU welcomed Erdoğan's message, with European Commissioner for Enlargement and European Neighborhood Policy Stefan Füle posting a statement on his Twitter account. "Welcome statement of PM Erdoğan on Armenians, reconciliation is key EU value.

Hope steps in this spirit will follow," Füle tweeted. In the U.S., State Department spokeswoman Jen Psaki said in a daily press briefing on Wednesday that Washington welcomed Erdoğan's historic public acknowledgement of the suffering that Armenians experienced in 1915. "We believe this is a positive indication that there can be a full, frank and just acknowledgement of the facts, which we hope will advance the cause of reconciliation between Turks and Armenians," she added.

On the same day that Erdoğan offer his condolences, Armenian President Serzh Sargsyan posted an official message on his website. In his statement, Sargsyan stated that Armenia does not consider Turkey an enemy but accused Erdoğan of "utter denial" of the 1915 incidents that are seen as "genocide" by the Armenian side.

Without referring to Erdoğan's message, Sargsyan said, "I publicly reaffirm: We do not consider Turkish society as our enemy. Bowing to the memory of the innocent victims we remember all those Turks, Turkish families who lent a helping hand to their Armenian neighbors." Regarding the Prime Ministry's condolences and reiteration of Turkey's offer to open the Ottoman archives, Turkish Foreign Minister Ahmet Davutoglu on Wednesday expressed his hope that Turkey's call to Armenia for joint academic research on the events of 1915 will be answered. "History is not just black and white, a grey area is needed. Everyone needs to show virtue by sharing the pains of the past," Davutoglu said. Highlighting that Turkey's move could be surprising to some, the foreign minister continued, "However, everyone is aware of Turkey's humanitarian and universal attitude towards the pains of humanity...We call on Armenia not only to display a common and humanitarian attitude, but also to build a future together," he added.

Turkish Interior Minister Efkan Ala said that Erdoğan's condolences to Armenians reflect Turkey's "self-confidence," adding that in the past, Turkey always took a defensive stance in response to such statements, but Erdoğan's proactive attitude shows there is a change in Turkey due to the country's domestic stability.

Turkey's main opposition Republican People's Party (CHP) welcomed Erdoğan's message. CHP Vice Chairman Faruk Logoglu said, "As CHP, we also hope that all the people who lost their lives in the beginning of 20th century rest in peace without any discrimination. We also share the pain of those people's grandchildren."

Logoglu said that Erdoğan's message was also significant in terms of timing but suggested that the reason Erdoğan chose 2014 to deliver the message after 12 years in power should be questioned. The vice chairman further accused the AK Party of politicizing religion, education, the judiciary and history as well. He said, "They are exploiting the history of the people who lived in these lands for political gain."

The harshest reaction came from the Nationalist Movement Party (MHP). MHP leader Devlet Bahçeli harshly criticized Erdoğan by saying that the Turkish nation has no fault in its history to apologize for.

Accusing Erdoğan of insulting his Prime Ministry post, Bahçeli said that Erdoğan was trying to win the favor of the Armenian diaspora and that his message does not reflect the reality of Turkey and its nation.
RELATED TOPICS