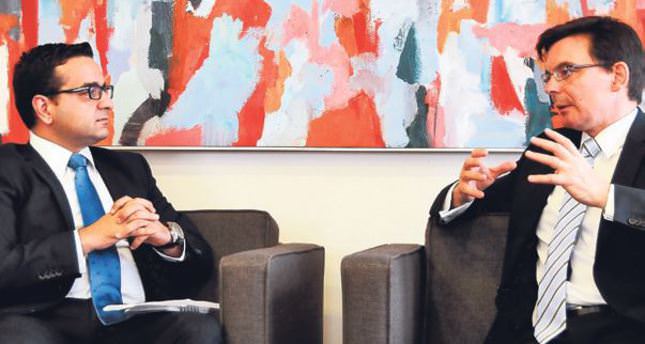 Daily Sabah spoke to Australian Ambassador James Larsen in the 99th anniversary of the Gallipoli War, which still causes pain for the two nations. Larsen underlined the importance of the comemoration

GALLIPOLI — ANZAC Day is regarded as one of Australia's most important national commemorations. It marks the anniversary of the first major military action fought by Australian and New Zealand forces during World War I at Gallipoli. Australians recognize April 25 as a day of national remembrance, but for many it holds greater significance. "Anzac day is a day to remember those who lost their lives at Gallipoli and served in the wars or during peacekeeping operations afterward. The Anzac spirit is not about Gallipoli. It was a nation-building experience for us," said Australian Ambassador James Larsen in an exclusive interview with Daily Sabah.

Australia's newly arrived ambassador said following the war, the friendship between Australia and Turkey has had a solid base but the bilateral relationship between the two has many areas in which it may continue to develop.

Both Australia and Turkey regard the 1915 Gallipoli landings as an event of particular significance in their modern histories. Every year, a large number of Australian and Turkish citizens attend commemorative services at Gallipoli. Over 4,400 Australian visitors attended the 98th Anniversary Commemorative Services in 2013 but this year, the 99th anniversary, has drawn larger numbers of Australians than before. "For this year's Gallipoli ceremonies, Turkish officials announced that there would be 8,000 available places for accommodation but 42,000 Australian applied to come to Turkey," stated Larsen. He also said that the 100th anniversary of the Gallipoli campaign will be commemorated jointly by Turkey and Australia in 2015. "Born from a shared experience of conflict, the suffering and destruction of the war, Australian and Turkish soldiers grew to a deep and mutual respect for their adversaries as soldiers and as men," noted Larsen. Larsen also said this mutual respect matured into a multifaceted, bilateral relationship with substantial dialogue across a wide range of issues, expanding bilateral trade and investment and strong people-topeople links.

On the other hand, the total trade volume of the two countries has room for improvement. Turkey is Australia's 34th largest merchandising trading partner, with twoway trade at $1.36 billion (TL 2.92 billion) in 2012. "We can invite Turkish companies to Australia as a destination of investment.

There are large and successful Turkish business groups that may see Australia as an opportunity. We can [also] encourage Australian businesspeople to look to Turkey as a destination of investment. One area that we have a lot of expertise in is mining. Mining is a developing sector in Turkey and there is plenty of room to be developed. Education is also another area that has potential to improve," Larsen remarked.

Even though bilateral investment is relatively small, in 2009 an Investment Protection & Promotion Agreement was signed and in 2010 a Double Taxation Agreement was adopted by both countries to encourage investment. Larsen noted a small number of Australian companies already invested in Turkey, mainly in the energy sector. "Other areas of investment interest include infrastructure, mineral exploration, construction and agribusiness," he added.

Another key area of multilateral and economic engagement between Australia and Turkey is through the G-20. Australia holds the presidency of the G-20 in 2014, and Turkey will hold the organization's top spot in 2015. "Australia and Turkey have a great deal to learn from each other and to share during this important time," Larsen remarked.

In order to improve bilateral relations and to enhance historical, social and cultural understanding between the two nations, at the 2012 Anzac Day services Turkish Prime Minister Recep Tayyip Erdogan and former Australian Prime Minister Julia Gillard announced a joint Australia-Turkey cultural year for 2015. Larsen said both the Turkish and Australian sides are currently planning activities for 2015. "The cultural year will promote Australia and Turkey as the modern, diverse, culturallyrich nations that they are, and encourage enhanced links between the two countries," he added.

Turkish immigrants in Australia are a key facet of bilateral relations. In Australia there are approximately 120,000 people of Turkish origin and according to Larsen, they are an active and valuable part of the Australian community. "Turkish people started to immigrate about 40 years ago. Most of them were from villages and came with modest resources. But they built their life in Australia and perfectly integrated to country. There are active and valuable members of the community," he added.