Erdoğan: Wiretap for blackmail is disrespectful 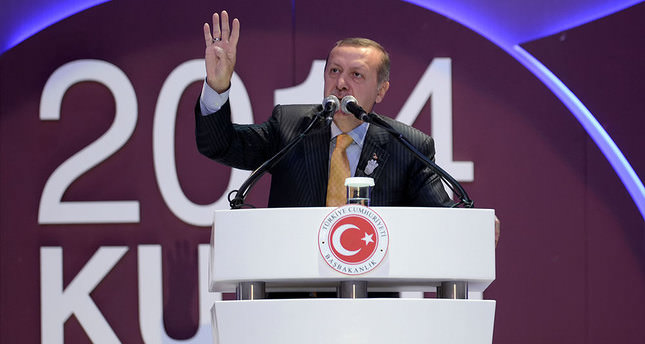 by AA Apr 26, 2014 12:00 am
ISTANBUL — Turkish Prime Minister Recep Tayyip Erdoğan has said that people who wiretap and record people's private lives to blackmail them are disrespectful of all Islamic values.

Erdoğan's comments on Friday were widely seen to imply that people linked to US-based scholar Fethullah Gülen were responsible for carrying out a series of recent surveillance operations which have led to controversy.

The prime minister was speaking at a program organized by religious vocational schools - the Imam Hatip School Graduate and Members Association - for the Sacred Birth week marking the birth of Prophet Mohammed.

Referring to the Last Sermon of Prophet Mohammed, he said: "Every Muslim is a brother to every Muslim and the Muslims constitute one brotherhood."

Erdoğan said that those who turn their backs to the pain of Palestine, Egypt, Somalia, Myanmar, Afghanistan and all Muslim lands on the Earth might as well be turning their backs on the teachings of the Prophet.

Addressing Imam Hatip school students, Erdoğan said that the government had lifted all double standards in the education system and asked them to work hard for the development of Turkey.

The introduction of a "coefficient factor" in the university entrance exam, which marked down exam scores if students wanted to study in any faculty other than theology, was one such reform which had grave affect on the schools.