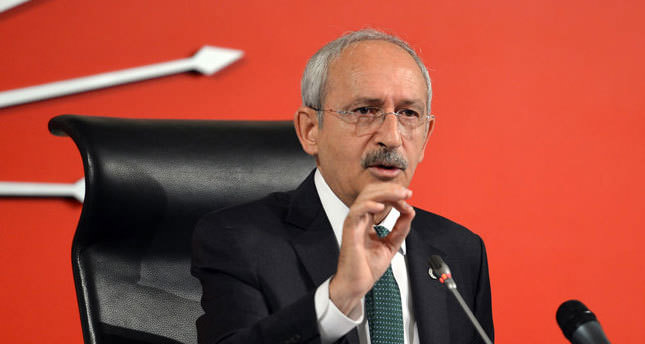 by daily sabah
Apr 28, 2014 12:00 am
ISTANBUL — Turkey's main opposition Republican People's Party (CHP) leader Kemal Kılıçdaroglu on Saturday convened with the party's provincial chairmen to discuss the March 30 elections in which the CHP was confronted with failure as opposed to the party that was expected.

Touching on the party's failure, Kılıçdaroglu said: "The vote increase for the CHP was not as much as we [CHP] expected.
We are not pleased with these results, but they [results] will not demoralize us. Quite the contrary, we will work more; there is no disappointment in our principles."

Kılıçdaroglu further evaluated Constitutional Court President Hasim Kılıç's politicized remarks on the 52nd anniversary of the Constitutional Court (AYM) on Friday. He pointed out that the judiciary should not be the backyard of politically dominating powers. "Judicial authorities raise their concerns, and this is not just one's concern. It is a common concern and discourse of AYM members," he said, supporting Kılıç's politicized remarks that were harshly criticized by ruling Justice and Development Party (AK Party) members. Asking judges and prosecutors to be brave, Kılıçdaroglu stated that judicial authorities' duties and responsibilities are guaranteed by the Constitution.

Kılıçdaroglu's statements contradicted his remarks in previous years in which he criticized Kılıç by saying that he had not even graduated from a law faculty, that he had no authority to speak about politics and that judges can only speak with their verdicts.

Bringing the CHP's possible presidential candidate to the table, Kılıçdaroglu asked the provincial chairmen to specify three candidates they could support in the presidential elections.

According to the obtained information, provincial chairmen asked for a revision in the CHP's Central Administration Board (MYK) and complained about the bureaucracy and multi-headed system within the party. Provincial chairmen said, "Due to party regulations, 17 vice presidents have different instructions, and it caused excessive bureaucratic regulations."

The CHP convened in 2012 to amend the party's regulations, but the provincial chairmen's complaints may pave the way for new amendments to its regulations in upcoming days through an extraordinary meeting.