Claims of isolationism on foreign policy is only rhetoric, says Haşimi 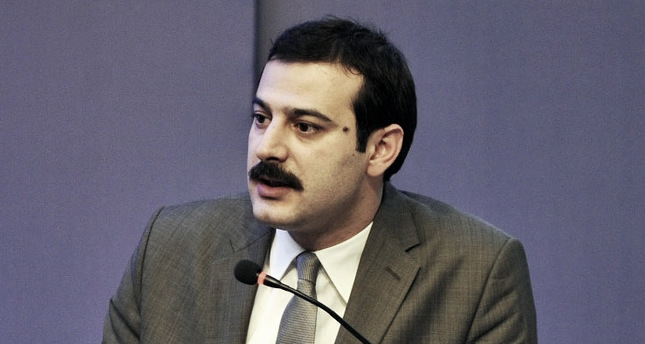 ANKARA — The international community did not anticipate Prime Minister Erdoğan's message of condolences regarding the Armenian deportations. To discuss the next developments and the perception of Turkey to the outside world, Daily Sabah sat down with Cemalettin Haşimi.

Everyone is talking about the message of condolence.

The text was translated into several languages, including Armenian and has had a marked impact. What happened really?

What happened in fact was that the government expressed, what it has already said about 1915 through different channels, but this time with a consolidated message. The text is both a call upon others and a stance. Our prime minister clearly set forth in detail our views on the events of 1915. In this regard all questions of "What does Turkey feel, think, and what will Turkey do?" have been answered.


There has been a lot of commentary about the condolence message. In your opinion what is its actual significance?

Joint future perspectives, joint feelings of suffering and the notion of "remembering the truth" shape our approach. Our prime minister demonstrated his determined political will, his humane stance through this conscientious call. As much as this was a display of self-confidence, it was both a political and humane expression by acknowledging, "the pain suffered is my pain too."

One of the key points of emphasis is the effort to grieve nobly. The prime minister is saying the events of 1915 left a crack in our conscious that emanates pain. This pain is his pain too. Because he neither belittles what was experiences nor behaves as though it is the sole example of such events. With this message on the 1915 events, the views of the government both internally and externally have been expressed on many different issues. I especially want to emphasize how this text shows the determined transformation within Turkey. This isn't just an approach toward the events of 1915. This text sets out the hope of the future, acknowledges the suffering of the past and is part of language, story and vision of new Turkey.

Discussions will doubtless continue about the text, as this is a turning point in terms of content, scope, method and timing. The inclusive message of the text is highly important. We will see the concrete effects of this text in the short term and the long term.

What do you think of critics who say the condolence letter is in preparation for 2015 and is insincere?

To claim the text is in preparation for 2015 is an injustice.

It is not in preparation for 2015 but an effort to share the pain of 1915 and look toward the future with hope. The pain of 1915 will be remembered with a message of hope and determination. There is a peace offering at hand, an extension of condolences. This text not only respects the suffering but also accepts it as its own. It is an effort to reconsider the past to the present.

As for the insincerity argument, the stance and candid nature of the message is clear. Those who have started a debate on the sincerity of the text are either ignoring the multi-faceted and powerful messages within the text or are themselves insincere. What can be said is this. We are describing the events as our own loss, a stain on our existence. Can there be any stronger expression than this? In this respect, the message is a call to be a witness. I saw, I felt and you are not alone is what the message is saying.

But in the message there is a call to not use the events of 1915 as a cause to be against Turkey.

There is because we do not find the frequent efforts to use the suffering for political capital appropriate.

This painful period in history should not be misused politically. To talk about the political level is another matter entirely. It is extremist elements that tend to political misuse the events. We are against this and call upon everyone and our direct interlocutors who feel this pain. We are saying that the events need to be seen through a perspective of truthful memory. We are saying is joint pain and humane and enlightened responsibility.

Our message is clear and lucid in regard to this very messy event which occurred tens of years ago and that has several different dynamics and levels.

Do you not find the criticism that Turkey's Foreign Policy has led it to be isolationist and under pressure to be credible?

We completely separate this message from our foreign policy agenda. These are different things. But we know this. The message is a reflection of the success of the will and confidence of the prime minister. A country with an isolationist foreign policy or under pressure domestically would not be able to put forth such a message. It would not even be attempted. Before everything, a strong conscience is required. Turkey's foreign policy represents conscience globally and it is highly normal for us to take this full circle. This isn't something that happened instantly. Especially since 2005 we have been discussing this and similar matters. Only a country with serious political strength, a strong horizon and capability can behave in a manner to face its own pain. It is worth reminding that this same country is also involved in the peace process of one of the bloodiest conflicts that affect several countries in the Middle East. We are talking about a Turkey, a country that has undertaken wide-ranging democratization, large-scale economic projects step-by-step and pursues a strong and active foreign policy. This country has a dynamic economy, a strong democracy and an active foreign policy. What isolationism? What pressure?

These criticisms do not go beyond rhetoric.

How do you evaluate the situation in Egypt, the developments in Syria, the outlook for the Arab Spring, the Iran-U.S. rapprochement, and the problems of Turkey-U.S. relations?

Each one is important and connected to each other and to other factors you have not mentioned.

But I would like to draw emphasis on two points. We would have to take each case and discuss the current situation at length. At the same time we would have to discuss in detail Turkey's stance and relations with Egypt, Syria and the U.S. We need to talk about the regional and global dynamics. These subjects cannot be brushed off with "The situation is really bad, the status is awful, Turkey is becoming isolated." At the same time we have to admit that state or regimebased foreign policy analyses are lacking.

For example, "Turkey is becoming isolated" does not mean anything for the 900,000 Syrians living in Turkey.
I
nstead they are grateful to Turkey and grateful to Erdoğan. This critic carries no meaning to civilians and opposition fighters who have survived the bloody attacks of the Syrian regime. Again the criticism means nothing to our citizens living in Europe, foremost those of North African origins, the "foreigners" in Europe, the transformation of EU countries and pro-EU segments. Turkey takes a central role in all of these discussions. Furthermore, in all these discussions Turkey has the power and influence to define the roadmap that will be taken through its stance.

Our region is currently affected by a short term, periodic crisis caused by events out of our control.
There are internal dynamics at play within the EU; all these events affect Turkey at the same time. Rather than instantly reacting to periodic crises, Turkey has a long-term political horizon and brings to the table the practicality of having such an approach. This will not only show Turkey's influence in the current crises but also show that we are right.

How do you evaluate claims that Turkey has gone from being an exemplary "model" to being a bad example?

Let me first state that we did not start the "model country" debate nor are we to conclude it. Others attributed this to Turkey or coined Turkey as a "bridge nation" and have changed their minds.

This is what the model nation discussion signifies to us. Our ministers and our prime minister have always avoided using such terminology and have seen all course of events as experience sharing. We are at the same point, in terms of possibilities; on the whole there is no disengagement between the two countries. In terms of capacity, we are in a better place compared to four-five years ago. There is almost no sphere in Africa, the EU or Central Asia in which our influence is not felt.

We continue to be a country that attracts international investment. Just a few weeks ago the biggest investors of the Gulf were at the Istanbul Investment Summit.

Agencies such as Turkish Airlines (THY), Republic of Turkey Prime Ministry Disaster and Emergency Management Presidency (AFAD), Turkish Cooperation and Coordination Agency (TİKA), Anadolu Agency (AA), Presidency for Turks and Related Communities (YTB)/ Turkish Scholarships and the Red Crescent continue to increase Turkey's influence in different areas. The international aid we have provided continued to accelerate in 2013 and the official figures are expected to be released soon revealing a significant increase.