Either furthering peace or conflict is possible, says Abdullah Öcalan 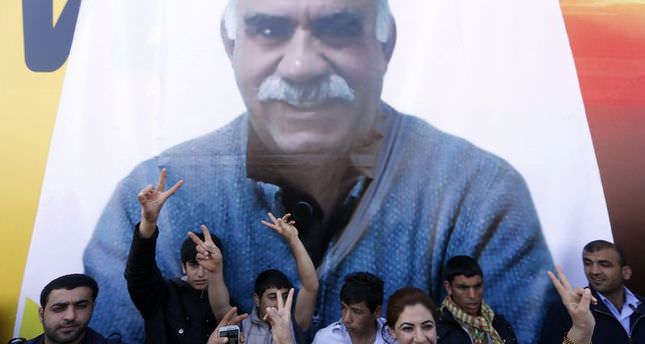 by Daily Sabah Apr 28, 2014 12:00 am
ISTANBUL — Members of the Peace and Democracy Party (BDP) and the People's Democracy Party (HDP) visited the imprisoned PKK head Abdullah Öcalan on Imralı Island. The group visiting the prison consisted of BDP Parliament Deputy Chairmen Pervin Buldan, Idris Baluken and HDP Istanbul deputy Sirri Süreyya Önder. The visit lasted for three hours, and it was the first visit since the March 30 elections.

Öcalan's message was ambiguous, yet leaving responsibility for the reconciliation process' continuation on the government's shoulders. He said, "The era is changing. Despite the existence of possibilities that can lead to a final solution, the conflict and clash risk is always on the table." Öcalan did not blame the government directly, but his rhetoric was threatening to the government if it breaks its promise to expand the Kurds' rights. He said, "If the government demands that armed groups return to their homes, the required legal steps must be taken rapidly.

It is crucial to take any necessary legal action." He added "In particular, the government's steps may both prevent the clashes and develop the reconciliation process in new forms while strengthening it. Despite the difficulties I have, I do not regret contributing to the process. I find the process very significant. The process is the most important contribution to Turkey's democratic steps in line with global standards."

The group stated: "Touching on the March 30 elections, Öcalan thanked everyone who contributed, supported and was employed actively. He also said that despite every difficulty, before and during the elections, the results are very important in terms of showing the people's will. He added that organized political groups must employ the results in the correct way, as the results provide democratic political ground." Öcalan said that he would deliver a letter to be read on May 1.

Meanwhile, as expected, the BDP and the HDP declared unity. The BDP and the HDP were divided before the elections, as the BDP is considered a Kurdish party. Yet, the HDP addresses leftist groups in Turkey. Through unifying the two parties, the HDP wants to leave its identity as being just a Kurdish party and address large groups across Turkey. BDP Chairman Selahattin Demirtas, who resigned from his post yesterday to join the HDP, said: "The HDP will not be a typical party. We will revise its logo. A new strong cadre will be created." The BDP, which has been nominating independent candidates in previous elections and unifying in Parliament later, plans to join the race in the 2015 general elections as the HDP. During the visit, Öcalan said: "The primitive Kurdish nationalists, the so-called Turkish leftist groups and some people considering themselves intellectuals are disappointed with the HDP project. Yet, HDP officials must tell the voters that this is a strategic step. It is wrong to assume the BDP distances itself from the region [referring to Turkey's southeast and east]. Some attempt to lynch the HDP by using nationalist rhetoric. Therefore, the HDP must be very careful and express itself by choosing the correct policies." Touching on the upcoming presidential elections, Öcalan said: "The presidential elections are very important. The HDP must be aware of its potential. And it must present its own candidate through unifying its potential." Demirtas in a parliamentary meeting last week stated, "New members may join the party, as we would like to encompass every social group in Turkey."

Despite BDP and HDP efforts to create a more comprehensive party rather than being the representatives of Kurds only, Vahap Coskun, an associated professor at Dicle University, told BBC Türkçe that the project is part of creating a common identity. He said that it is to be made under pressure. He added: "The BDP is still confused about the ongoing process. The BDP's base is not very happy. I do not think this unity will be helpful for Kurdish politics."