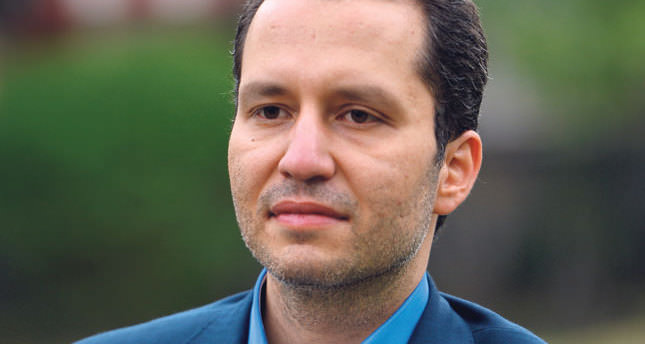 After the CHP's alliance with the Gülen Movement led to divisions within the party, two conservative parties also suffer from the consequences of remaining silent during the Dec. 17 operation

ISTANBUL — Speaking to Sabah newspaper, Fatih Erbakan, who stated he would announce his candidacy for SP's general presidency on May 4, made remarks regarding the SP's March 30 failure and the Gülen Movement's adverse effect on the party's voting rates.

Touching on SP's current leader Mustafa Kamalak's ties to the Gülen Movement, Erbakan said, "SP grassroots criticize taking one's side in the rift [between the Gülen Movement and the government] instead of inviting people to justice. This situation negatively affected our [SP's] vote in the election period. We should avoid using any discursive statement and action. Individuals in the party's administration should be more sensitive on this issue."

When asked about the Dec. 17 operation carried out by the Gülen Movement to tarnish the images of key governmental bodies, Erbakan harshly criticized the movement.

He said the movement should only work on advising and education, rather than other issues, and the government should ensure the rule of law. He added that the government should find the perpetrators and pave the way for their trials. "Infiltrating secretly within the state and abusing government opportunities' for their own sakes is unacceptable," said Erbakan. "Administrative authorities who ignored those infiltrators within key governmental bodies on purpose should also be punished."

Mainly supported by conservative social groups in Turkey, SP was founded in 2001 after its precursor, the Virtue Party (FP), was banned by the Constitutional Court.

The party is strongly based around the Milli Görüs ("National Vision") ideologies of its founder, the late Necmettin Erbakan. After the FP was banned, the party's reformist wing formed the AK Party and the hardliners founded the SP.

The other party adversely affected during the local elections due to their close relationship with the Gülen Movement is the BBP.
Publishing a declaration that was signed by 1,000 BBP members, a new platform within the party, the Reunion Platform, highlighted the "parallel state," a term used to refer to Gülenist infiltration into key governmental bodies and stated the BBP acted against the party's principles.

Referring to the BBP's stance regarding the rift between the government and the movement, the declaration expected to be published today says that BBP took the wrong stance in the latest political polarization in the country. The declaration pointed out that the nation's will would be never surrounded by bureaucratic oligarchy. "Regarding the problems caused by certain groups [the Gülen Movement], we believe that no different parallel group is allowed to organize within the state," said the declaration, denouncing Gülenist infiltrators. "Alevis, Sunnis and Gülenists should all have the chance to hold a governmental position. They should do so not because of their connections but because of their qualifications."

The declaration said that the BBP could not reflect the sensitivity of its grassroots in the latest rift and appeared like a party that is operated by certain groups.

The BBP's resigned leader Yalçın Topçu made comments on the BBP's pro-Gülenist stance. He stated that the BBP's pro-Gülenist approach and the party's grassroots criticism against the BBP-Gülenist alliance had an impact on his resignation. According to claims published in several media outlets, Gülenists attempted to seize the control of the BBP and when Topçu refused to ally with the movement, he was forced to resign. Also, the case on the BBP's heroic leader Muhin Yazıcıoglu's death in 2009 after a helicopter crash still remains unsolved.