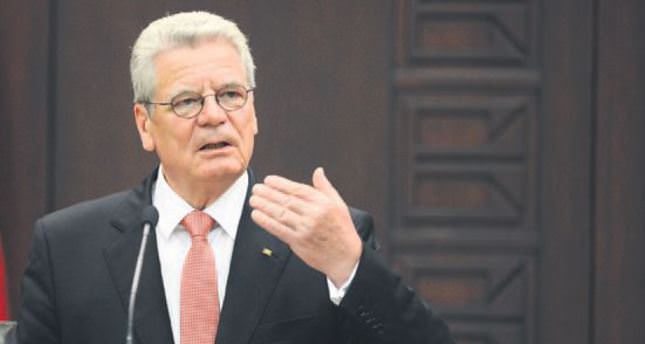 by Daily Sabah Apr 29, 2014 12:00 am
ISTANBUL — "We should focus more deeply on what we can do to help these poor people in need," said Gauck, who noted Germany was able to contribute TL 2.5 million in cooperation with the Turkish Red Crescent.

In his formal visit to Ankara, Gauck visited the Mausoleum of Ataturk, the founder of the Turkish Republic and proceeded to the presidential palace in Cankaya where he was greeted with a formal ceremony. Turkey's President Abdullah Gul in a press statement said he sought Germany's support in Turkey's bid for EU membership and said Turkey views the EU as a "project for peace and democracy."

"Values like democracy, human rights, rule of law and free market economy are rooted in Europe and we share these values because rights, laws, regulations and accountability are all a part of the principles we promote," said Gul, who also expressed his pleasure to host the German president and his team. Gul also thanked Gauck for visiting the Syrian refugee camp in Kahramanmaraş, a rare occurrence that many foreign government officials seem to skip. "Government officials usually visit Ankara and Istanbul in their formal visits," said Gul, who noted Gauck's initiative will help strengthen relations between Germany and Turkey as he will have first-hand information about Turkey.

The Syrian civil war entered its fourth year with serious political, economic and social consequences for the entire region. According to official data, approximately 150,000 people died in the Syrian war. Almost 3 million people fled to neighboring countries and approximately 6 million people abandoned their homes and become internally displaced.Therefore, almost 10 million Syrians are directly affected by the conflict. According to the report, as of the end of 2013 there are 210,358 Syrians living in 15 tent cities, one transitional reception center and six container cities established across Turkey. Moreover, there are 600,000 Syrians living outside the camps in several cities. In Turkey, the Disaster and Emergency Management Presidency (AFAD) is responsible for the needs of Syrian refugees. According to official data, there are over 800,000 Syrians in Turkey. AFAD said 432,769 Syrians settled in camps and 222,411 of them returned to Syria.

Syrians in Turkey who live in camps have better living conditions compared to those in other countries; however, the living conditions outside of camps are more difficult. On the other hand, refugees struggle with emotional and psychological problems rather than problems related to the services provided in the camps in Turkey.

Turkey has been praised by a number of global organizations for its contribution to relief efforts for Syrian refugees.The Syrian civil war has left millions of people without homes and adequate means to make a living. According to AFAD about 36 percent of the refugees reside in 20 camps in 10 different cities while 64 percent are located in cities in the south and southeast of Turkey. Statistics show almost 81 percent of the refugees left their homes due to security concerns while others left for economic or political reasons. AFAD's reports indicate there is no accurate information regarding the total number of Syrian refugees in Turkey and as of August 2013 there were about 200,386 refugees living in Turkish camps and it was estimated that over 64 percent of refugees live outside of camps throughout the country.