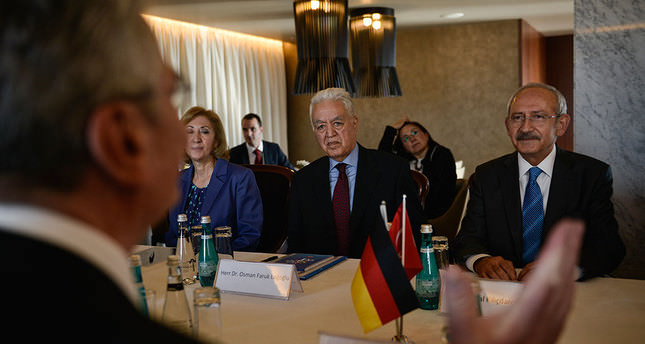 CHP Deputy Chairman Faruk Loğoğlu addressed the media after the one-hour meeting, saying CHP's views on rising racism in Germany were not discussed during the meeting. However, the main opposition party wants justice to be served as soon as possible, according to Loğoğlu.

On April 5th, Burak Bektas, a Turkish man, was killed in the mostly Turkish populated area of Neukoln in Berlin. The murderers' whereabouts are still unknown as the killing raises debates of increasing racism in Germany.

"We are against all kinds of racism whether it is in Germany, Turkey or in the world," Loğoğlu added.

Loğoğlu said the situation of Turkey's Alevi people, who constitute the largest religious minority in the country, was another topic discussed during the meeting. He said the German president was surprised that 'Cemevi's, Alevi place of worship, do not count as official praying halls.

Cemevis are fundamentally important for the Alevi population but are not recognized as places of worship in Turkey, according to the Presidency of Religious Affairs.

Loğoğlu quoted Gauck as saying there is a perception that Turkey has a 'weak' opposition.

"Gauck said CHP's projects are important as a social democrat party,'' Loğoğlu said. ''It is important to make the youth arouse interest to politics and [Gauck] knows that CHP took lessons from the Gezi Park incidents."

"The president wished us luck, stating that 28 percent is considered as a huge vote in Germany," said Loğoğlu.

Joachim Gauck also said taboos concerning injustice against Armenians and Kurds in Turkey have been lifted.

Gauck spoke at the Middle East Technical University during his Turkey visit, noting that the influence of the military in politics have been pushed back in the country.

''Turkey began the process of dialogue with the Kurds, and reduced the number of violent conflict,'' Gauck said. ''For example the injustice taboos against the Turkish Armenians or Kurds began to be lifted.''

Prime Minister Recep Tayyip Erdogan's expressed condolences to the descendants of Armenians who lost their lives in the incidents of 1915 are positive developments in Turkey, according to Gauck.

"Turkey assumed many Syrians refugees without any conditions and established refugee camps, schools, supplied humanitarian aid and service health assistances,'' Gauck said. ''In fact, the government also provides medical assistance to around 500 thousand people who do not live in the refugee camps.''