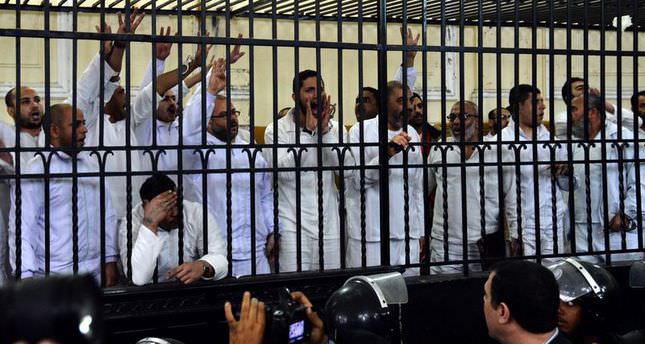 by AA Apr 29, 2014 12:00 am
ANKARA — Turkey condemned on Monday an Egyptian court for sentencing 37 supporters of ousted president Mohamed Morsi to death and 491 others to life in prison.

The court also referred 683 other people to the country's mufti for possible death sentences against them, judicial sources said.

In a statement issued on its website, Turkey's Ministry of Foreign Affairs said: "These decisions are incompatible with the universal principles of law, especially a fair trial and the right to life. The Egypt Court violates the fundamental rights and freedoms according to Universal Declaration of Human Rights."

The Ministry also calls for the international community to react against the court decisions.

"Turkey supports the stability and security of its friend and brother Egypt of vital importance for both Turkey and the region as a whole in this difficult period," the statement said.

On Monday, the Egyptian court sentenced 37 Morsi supporters to death on charges of committing acts of violence in the upper Egyptian province of Minya last August after security forces violently dispersed two pro-democracy sit-ins in Cairo and Giza, killing hundreds of protesters in the process.