Turkish soldiers did not face problem at Suleiman Shah 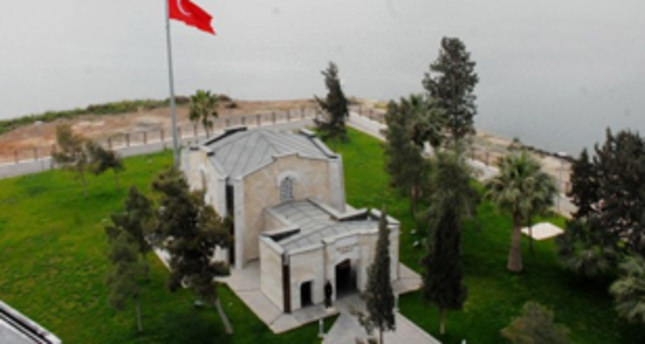 by Daily Sabah Apr 29, 2014 12:00 am
ISTANBUL — Turkey sent new troops to Suleiman Shah tomb, a Turkish enclave in Syrian territory on April 23. Foreign Minister Ahmet Davutoğlu said, "We have been placing our soldiers for the protection of the tomb as we do as a routine job. We take every safety measure to protect our soldiers as the war in Syria continues. The soldiers' locations can be changed in Turkey according to need of change." The Turkish military general staff stated that the convoy returned the same day to Turkey after placing the troops securely. According to the statement published on the military's webpage yesterday, the convoy used different routes while entering Syria and exiting. The convoy was back to Turkey around 8:00 p.m.The statement refuted some media outlets' claims that the convoy was stopped by Islamic State of Iraq and Levant (ISIL) militants and asked to pay to continue to the tomb. Nearly 20 Turkish troops are deployed to protect the tomb, which is 35 kilometers from the Turkish border. Turkey also has concerns about ISIL, which commits atrocities against anyone they identify as an enemy, particularly as it holds areas very close to the Turkish border. ISIL threatened Turkey last month and demanded the evacuation of Turkish troops from the Suleiman Shah tomb. Those threats also saw officials in the government take a keener interest in ISIL. Turkey has stationed about 25 soldiers at the site to protect the tomb, which houses the remains of the predecessors of Osman Bey, the Ottoman Empire's founder. Turkey responded to ISIL's threats by making it known that Ankara will take action against the group should it attempt to move in on the area. The group was once part of al-Qaeda but was disowned by the organization due to its aggressive stance against other opposition groups in Syria, including al-Qaeda's official Syrian branch, Jabhat al-Nusra.ISIL is known for its atrocities, brutality and extremist interpretation of religious jurisprudence.