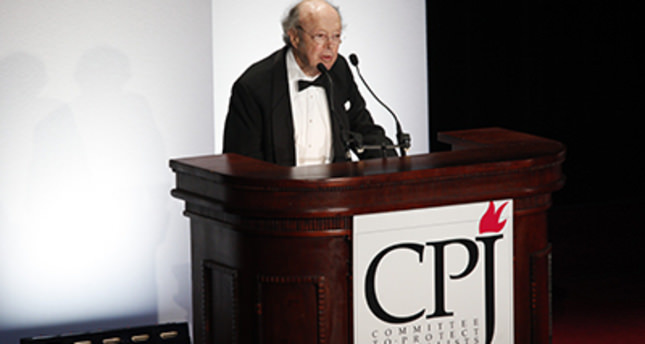 by Nurbanu Kızıl Apr 30, 2014 12:00 am
The Committee to Protect Journalists (CPJ), an American nonprofit organization known to promote press freedom throughout the world, is inaccurately claiming that a high number of journalists in Turkey have been detained over their ideological views, whereas a careful examination of the list of those in prison exposes other reasons for their imprisonment.

As of April 18, 2014 the total number of journalists in prison in Turkey is 15 compared to 49 in 2012, seven of whom have been convicted and sentenced, and eight of whom are under custody while being tried.

The CPJ has consistently claimed these journalists were imprisoned for expressing views opposing the government.

However it has ignored the fact that almost all of those imprisoned were detained on a number of criminal charges, most importantly for being part of a terrorist organization.

For instance, out of 15 journalists, seven are members of the PKK, an organization recognized as a terrorist group by NATO, the EU and a number of states. Three are members of the Revolutionary People's Liberation Party-Front (DHKP-C), a Marxist-Leninist organization which is known to have carried a number of assassinations and suicide bombings aimed at police forces, civilians and the U.S.

Embassy in Turkey and is recognized as a terrorist group by Turkey, the U.S., and EU. Three are associated with the Marxist-Leninist Communist Party (MLKP/MK), an illegal terrorist organization.

One is a member of the Communist Party of Turkey (TKP - TİKKO), a Maoist guerrilla organization currently waging a People's War against the Turkish Government. One is associated with the Great Eastern Islamic Raiders' Front (İBDA-C), an Islamic militant organization. More importantly, a careful examination of the crimes committed by these individuals clearly shows that their occupation as journalists were irrelevant to their imprisonment, as they have committed serious crimes which would be punishable despite their occupations.

The crimes included "the possession or transfer of hazardous materials, forgery of official documents, attempts to destroy the constitutional order and the possession and carrying or purchasing of unregistered firearms and bullets." Many of the individuals cited by the CPJ were members of an armed terrorist organization, while the establishment, administration and promotion of an armed terrorist organization also provides sufficient cause for their imprisonment.

Of those who were convicted and received sentencing, it has been reported that a number of the so-called journalists have used fake ids, sought to launch attacks against public places such as Kalamış Marina in Istanbul, engaged in the armed robbery of banks, bombed a number of institutions and public places, attacked security forces, recruited guerilla members for the PKK and promoted terrorist activities in the country. Controversially, the CPJ oversimplifies the detainment of these individuals and claims they were imprisoned solely because they are journalists and expressed dissenting views, ignoring the dangerous involvement of such individuals in terrorist activities.

The CPJ on March 27 indiscriminately called on Turkish authorities to release all journalists and drop any charges against them, despite the fact that a number of these "journalists" pose an imminent threat to the national security of Turkey and have disobeyed laws and regulations.

In addition, Nina Ognianova, the coordinator of the Europe and Central Asia Program of the CPJ has previously called on Turkish authorities to authorize Mahir Zeynalov, a journalist working for the Gülenist newspaper Today's Zaman to come to Turkey after he was deported to Azerbaijan.

Here too the CPJ has presented inaccurate information as they claimed Zeynalov was deported based on an anti-government tweet he posted, whereas in reality he was deported because his residency permit in Turkey had expired.