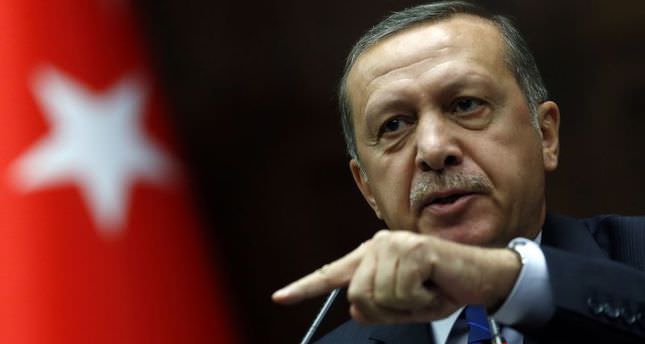 Speaking at his party's group meeting and in an exclusive interview with the U.S.-based Public Broadcasting Service, PM Erdoğan came to the fore with remarks on issues facing Turkey

ISTANBUL — "As Turkey prepares for the 100th anniversary of many important issues, we [the AK Party] think we should evaluate history from different perspectives. Our history has been written by other powers and we endured great pains," said Erdoğan, adding that Turkey should evaluate historical issues by moving away from political disputes and prejudices.

The prime minister touched on how polarization and reactionism have been used to discipline the nation for the last 200 years, but it also caused fear in the public. A nation that lives with fear is not able to reform and set up a healthy future, Erdoğan stated.

Reiterating his message on the eve of the 1915 incidents, Erdoğan said he wished selfconfidence and strength for every Turkish citizen. "If an individual in the country is exposed to discrimination due to his or her ethnic origin, religion, lifestyle or values, it means that there is oppression," he said, noting that since the AK Party came to power it has been working to improve the nation's self-confidence.

Addressing Turkish citizens, Erdoğan said, "Are you a Turk? You will have no fear.

In an interview with Charlie Rose on a program aired on the U.S.-based TV channel Public Broadcasting Service (PBS) on April 28, Erdoğan echoed his sentiments on the Armenian issue. When asked whether it was possible to define the Armenian issue as genocide, Erdoğan said, "It is not possible because there are Armenians living in Turkey now."

Touching on the normalization of relations between Israel and Turkey, Erdoğan thanked U.S. President Barack Obama for his efforts to normalize relations between Turkey and Israel after Israeli commandos attacked the Mavi Marmara ship carrying humanitarian aid and construction materials to the Gaza Strip, killing eight Turkish nationals and an American of Turkish origin in international waters.

On international social networks and Twitter's temporary ban in Turkey in February, the prime minister said, "Firstly, Twitter has to respect everybody's freedom. Second, they have to establish an office in my country.

They have to pay taxes in my country as they did in the U.S." Erdoğan added that the Twitter issue is not only about paying taxes but also about the court's decision that the social network did not respect the rights of individual citizens, including the prime minister himself who requested to have certain Twitter accounts frozen for insulting remarks.

During his interview, Erdoğan touched on political remarks made by Turkish Constitutional Court (AYM) President Haşim Kılıç on April 25 after Kılıç and Erdoğan's dispute over the Twitter ban where Erdoğan criticized the AYM's verdict to lift the Twitter ban and Kılıç responded harshly. Erdoğan said, "Courts should speak with their verdicts, but his [Kılıç's] speech aims to teach a lesson to all. I sadly listened to that speech and I think President [Kılıç] will remain under the burden of his speech for the rest of his life."

When asked about Turkish-EU relations regarding expectations that Turkey can be the bridge between the Western and Islamic worlds, Erdoğan stated that it is expected, however he is not certain of the West's sincerity on the matter.

Erdoğan pointed out that the EU has kept Turkey at the door for years even though its member countries increased from 15 to 27 during Erdoğan's terms of office. Referring to the delay tactics used by the EU against Turkey, Erdoğan noted that if there would be no EU, it would not be the end of the world for Turkey.

Regarding the ongoing Syrian civil war and Turkey's hosting of Syrian refugees, Erdoğan criticized the U.N. for not taking important and necessary steps on the conflict.
He said there are more than 700,000 refugees in Turkey and the country spent $3.5 billion on them, including $150 million in contributions from other countries.
Erdoğan called for the international community to take action on the situation in Syria.