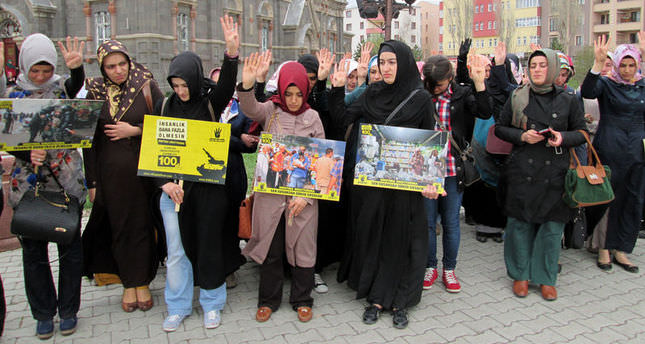 International community responded to the death sentences harshly and called on Egypt to stop the executions. Turkey urges the world to increase pressure

ISTANBUL — Turkey condemned on Monday an Egyptian court for sentencing 37 supporters of ousted president Mohamed Morsi to death and 491 others to life in prison. The court also referred 683 other people to the country's mufti for possible death sentences against them, judicial sources said.

Turkey's Ministry of Foreign Affairs in a statement published on its website said, "Such verdicts are incompatible with the universal principles of law, including in particular the right to a fair trial, the right to life and clearly violate the fundamental rights and freedoms enshrined in the Universal Declaration of Human Rights." The ministry also called for the international community to react against the court decisions. "We hope that the Egyptian judicial authorities will reassess these decisions which will cause additional harm to the peace and well-being of the Egyptian people and damage the international reputation of Egypt, which has a great culture. We also confirm once again that, as always, we stand with the friendly and brotherly people of Egypt during this difficult process," the statement said.

U.N. Secretary-General Ban Ki-moon said the verdict would impact stability in Egypt. "Verdicts that clearly appear not to meet basic fair trial standards, particularly those which impose the death penalty, are likely to undermine prospects for long-term stability," said Ban. The White House said on Monday that the U.S. is "deeply troubled" by an Egypt court's death sentence for the leader of the Muslim Brotherhood and hundreds of supporters. The U.S. urged the Egyptian government to end the use of mass trials, reverse this and previous mass sentences, and ensure that every citizen is afforded due process. "Today's preliminary death sentences against 683 defendants and the upholding of death sentences against 37 defendants from a March 25 decision are unconscionable," said U.S.
State Department spokeswoman Jen Psaki in a statement released to the press.

The EU Parliament and member states denounced the mass death sentences, criticized the lack of a fair trial and called for a review. European Parliament President Martin Schulz said Monday capital punishment was "never acceptable" for Europeans. "I think that this is not a constructive contribution to bring peace to the country," he said, adding "There should be a fair trial for the accused."

Meeting this week in Strasbourg, the Parliamentary Assembly of the Council of Europe committees on political affairs and human rights denounced as "unacceptable" the mass death penalties. The parliamentary assembly urged the Egyptian authorities to guarantee a fair trial for the defendants, "a pre-condition for its smooth democratic transition, in particular on the eve of presidential elections." They also called upon Cairo to implement an immediate moratorium on executions as a step toward the abolition of capital punishment.

German Foreign Minister Frank-Walter Steinmeier said in a written statement Monday that the death sentences were a "mockery against the rule of law," and called for the ruling to be overturned. German Member of the European Parliament Alexander Lambsdorff said, "I believe that this is a shame case with a shame verdict."

France's Foreign Ministry issued a statement Monday saying it was extremely concerned over the ruling.

The U.K. Foreign Office quoted Foreign Secretary William Hague as saying the verdicts "damage the reputation of Egypt's judicial system, and are likely to undermine international confidence about progress toward reform and democratization in Egypt. As the United Kingdom we oppose the death penalty in all circumstances as a matter of principle. Furthermore, we are deeply concerned by reports that many of the defendants were tried in their absence and did not have proper legal representation in court."

The human rights group Amnesty International warned of "grave flaws" in Egypt's criminal justice system regarding the court's death sentences. "Today's decisions once again expose how arbitrary and selective Egypt's criminal justice system has become. The court has displayed a complete contempt for the most basic principles of a fair trial and has utterly destroyed its credibility. It is time for Egypt's authorities to come clean and acknowledge that the current system is neither fair nor independent or impartial," the group said.

The human rights group also stated, "The verdict must not be allowed to stand. The convictions of the 37 sentenced to death and 491 sentenced to life in prison must be quashed and fair retrials with no possibility of the death penalty must be ordered immediately for all the defendants." Amnesty International's Middle East and North Africa Deputy Director Hassiba Hadj Sahraoui said Monday the court's ruling had "utterly destroyed its credibility." "Egypt's judiciary risks becoming just another part of the authorities' repressive machinery, issuing sentences of death and life imprisonment on an industrial scale," Sahraoui said.

The International Union for Muslim Scholars also slammed the ruling. "Those sentences, which are not based on impartial investigations or stable political atmosphere, lack credibility and confirm that they are designed to crush opponents," the Union said in a statement. The International Coalition for Freedoms and Rights issued a statement saying it is "deeply concerned" over the verdicts. The first stop of the so-called Arab Spring, Tunisia's President Moncef Marzouki said that Egypt must reconsider the death sentences. "I appeal to Egyptian authorities not to enforce these verdicts," Marzouki said on Monday.