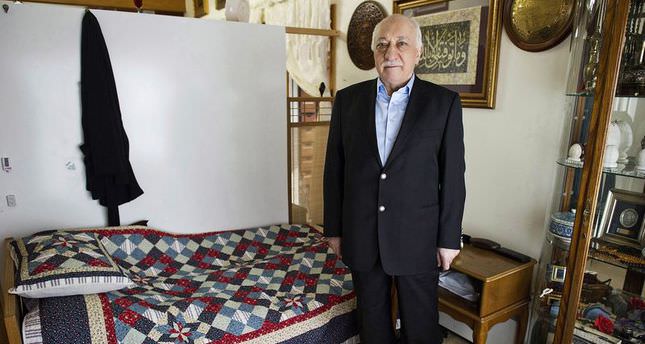 by daily sabah
Apr 30, 2014 12:00 am
ISTANBUL — In the interview with US broadcaster PBS, Prime Minister Recep Tayyip Erdoğan said he hoped the US would deport Fetullah Gülen and send him back to Turkey.

In the interview, Erdoğan said he hoped Washington, as a "model partner", would deliver on the issue. "At least they should deport Gülen," he added.

Gülen, 74, has lived in self-imposed exile in the US state of Pennsylvania since 1997.

Gülen is accused by the government of masterminding an illegal group using people loyal to him who were nestled within key institutions of the state, such as the police and the judiciary.

Erdoğan pointed out his party encountered no problems with the shadowy movement during its first two terms in government. "The dispute started after the referendum for constitutional amendments in 2010," Erdoğan said.

Pointing out that Gülen attempted to expand his power after the referendum, Erdoğan stated that the movement tried to create solidarity between police and judiciary. When the solidarity was strengthened, the movement conducted an operation against Hakan Fidan, the head of Turkish intelligence, on Feb. 7, 2012, accusing the head of the National Intelligence Organization (MİT) of espionage and holding meetings with PKK leader Abdullah Öcalan and other PKK members.

This is despite the fact the government gave the MİT the authority to meet with the terrorist organization in order to pave the way for reconciliation.

Through passing the long-discussed MİT bill two weeks ago, the government broadened the MİT's authority and boundaries of duty to include dealing with internationally recognized terrorist organizations such as the PKK and the Islamic State of Iraq and Levant (ISIL).

Erdoğan said as the AK Party was subjected to lies and defamations during the Dec. 17 operation and prior to the elections, it was important to intervene to correct the claims. "We have never thought these people would be that cruel and careless to favor their own interests,"

Erdoğan lamented. "We have never thought they would attempt to redesign politics in Turkey."

He called the Dec. 17 operation a coup attempt. "They placed a bugging device and wiretapped my discussions," the prime minister said.

"They followed the opposition members' daily lives. They breached and publicized the top secrets of the state. How can we say they are in favor of Turkey? I consider these people members of a terrorist organization."

He said he expects the U.S., as a partner, to extradite such people. "When we arrest someone threatening U.S. security, we extradite them," Erdoğan pointed out. "We have extradited more than 10 people so far. We expect the same thing from the U.S. The members of this movement threaten Turkey's security directly."

Erdoğan's statement raised the question of Turkey demanding the extradition of Gülen. After the AK Party's group meeting yesterday, Erdoğan responded to journalists' questions. When asked about Gülen's extradition, Erdoğan said "the legal procedure for the extradition will be initiated." "Before demanding the extradition, an investigation must be launched," Former AK Party Konya Deputy and lawyer Hüsnü Tuna said. "In penal cases, a person may be invited to the court after the case starts. At the beginning, the court searches for the suspect in Turkey.

But if there is certain evidence proving that the suspect lives in a specific country, the court applies to the Justice Ministry. Then the Justice and Foreign Ministries cooperate and demand the foreign country to extradite the suspect under the conditions of extradition agreement."

Another lawyer, Kerim Altıntaş, said, "An investigation will be launched against Gülen. He will be called to be present at the court during the sessions. As he will not attend the sessions, Turkey will be able to demand the U.S. to extradite him."