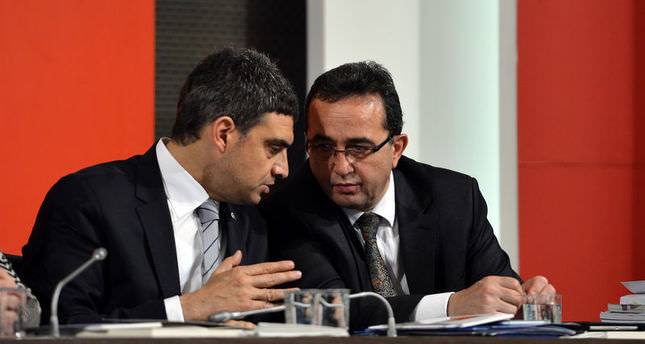 by Daily Sabah May 01, 2014 12:00 am
ISTANBUL — The Istanbul Public Prosecutor's Office mistakenly issued a summons for Turkey's main opposition Republican People's Party (CHP) leader Kemal Kılıçdaroğlu to testify as a suspect on April 29. Following the summons, CHP Vice President Bülent Tezcan, who is responsible for election and legal issues, stated that the CHP sent the document back to the Prosecutor's Office and initiated procedures to withdraw the summons.

In response to journalists' questions, Tezcan evaluated the situation as "tactlessness" and Kılıçdaroğlu stated that he did not know why he was invited to testify. In a statement, the Istanbul Public Prosecutor's Office remarked that the summons was issued by mistake and procedures have been launched to ensure its withdrawal.It was reported that the summons was issued as part of an "insulting" crime investigation launched by Prosecutor Mehmet Demir. After his mistake, a deputy public prosecutor was assigned to the investigation.

The CHP responded with a statement saying that the summons for Kılıçdaroğlu to testify was completely against Kılıçdaroğlu's legal immunity regulated by the constitution and the Justice Ministry's internal directives and judicial practices. "Kemal Kılıçdaroğlu is the CHP's leader and Istanbul deputy. He is ready to pay the price in front of an independent Turkish judiciary and public prosecutors, but what is significant is the existence of a judiciary and investigating authority that abide by universal legal principles, independence and equilibrium. The reason why the CHP did not respond to the Public Prosecutor's invitation is that the investigating authorities apply the constitution's legal immunity article when the ruling party's politicians are in question, but disregard the article when an opposition party's member was targeted." Regarding the summons, Kılıçdaroğlu stated, "Considering the previous moves of the prosecutor [Mehmet Demir], I do think that the summons was issued deliberately."

AK Party Vice President Hüseyn Çelik commented on the summons on his Twitter account. He said, "Issuing a summons for Kılıçdaroğlu to testify is an absolute constitutional infringement. It was a huge negligence despite the statement of the Public Prosecutor's Office." According to the Turkish Constitution's 83th article, Kılıçdaroğlu is immune from prosecution as he is a political party leader and
deputy.