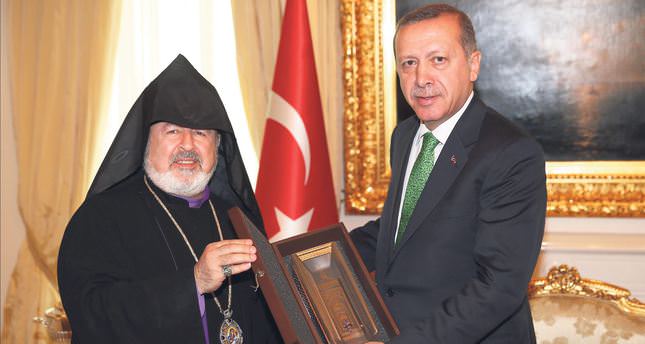 As he did several times before on several issues, the prime minister took the first step toward a solution through sharing in Armenians' pain on April 24. As the prophet sent a pigeon, Erdogan extended an olive branch. We cannot ignore that.This olive branch is the symbol of peace. We do not want this branch to die but we want this branch to bear fruit. There is a corpse on the table. Unless a solution is reached, the corpse's stench becomes unbearable. The two nations must unite for a solution."Atesyan said, " "Our country is at peace. These people experienced much pain. Yet, we need to get together to find a solution."

After saying, "Our country is at peace; we cannot ignore the developments,"Ateşyan added, "These people experienced much pain. Yet, we need to get together to find a solution." During his visit, Ateşyan was accompanied by the Chairman of Yedikule Surp Pırgiç Armenian Hospital Foundation and General Director of Şişli Karagözyan School Dikran Gülmezgil. Both of them also thanked Erdoğan for his statement.

While replying to journalists' questions, Ateşyan said the statement should be seen as a bridge between the two peoples to further relations. He said that Erdoğan did not inform him on what the next steps would be but he stated that he was sure that there would be new steps concerning the Armenian question.He added that "both sides must make sacrifices to deepen the friendship."

Erdoğan and Aramyan also held talks about problems currently facing the Armenian community. One of the issues was the process of returning the community's goods which had been confiscated in the Turkish Republic's early years. "We still demand some property. There are still problems that must be solved in the courts. But we need time. I believe all of these problems will be solved," said Ateşyan.

Despite the negative atmosphere between the two countries, which has lasted for decades, Turkey, one of the first countries to recognize Armenia's independence in 1991, has taken steps to mend relations. President Abdullah Gül was the first Turkish president to visit Armenia when in 2008 he watched a football match between the two countries' national football teams. The visit aimed to mend and improve both political and economic relations. The following step was to establish diplomatic ties, as the two countries do not have diplomatic relations. Following the visit, the two countries signed two protocols to "establish diplomatic ties" and "improve bilateral relations" in 2009. Yet, the Armenian Constitutional Court cancelled the protocols as Armenian politicians were unhappy with the ongoing process and raised genocide claims. In 2010, Armenia halted the processes and relations were frozen.

In the background of the negative response to Turkey's outreach, Turkey's steps to broaden minorities' rights continued independently from relations with Armenia.Turkey launched reform packages to return property previously belonging to minorities.
Additionally, those who could prove they were citizens of the Ottoman Empire after fleeing to different countries after World War I were guaranteed to receive Turkish citizenship.In 2010, one of the most important churches, the Akhdamar Church in Turkey's eastern city of Van, was opened for religious ceremonies. In 2011, another big Armenian church in Turkey's southeast in Diyarbakır, Surb Giragos Church, was opened for religious ceremonies. In the last three years, 10 properties were returned to Armenian foundations.
Moreover, several properties are to be returned to Armenians as the process continues.

According to Foreign Ministry sources, Turkey has been aiming to normalize relations with Armenia to contribute to security and stability in the Caucasus region. In 2013, Foreign Minister Ahmet Davutoğlu visited Armenia's capital, Yerevan, as the two countries were members of the Black Sea Economic Cooperation Organization.Davutoğlu said the visit was an important step and overcame many psychological barriers.Analysts noted that despite Armenia's reluctance to improve relations, Davutoğlu's visit was significant in terms of signaling a new reconciliation process when Armenia is ready.

Besides the diplomatic attempts, in 2006 Turkey offered to create a commission that would include Turkish and Armenian historians to delve into the 1915 incidents. The commission was to open Armenian, Turkish, British, German and Russian archives to shed light on the issue. If the alleged genocide was proven at the end of the commission's investigations, Turkey said it was ready to admit the occurrence. Yet Armenian officials did not accept the offer, putting forth several excuses. Turkey opened nearly 100,000 archives, including Foreign Ministry and Prime Ministry archives. Turkey also allows eligible researchers who meet requirements to search Turkish Army archives.
Sources say Turkey will open the army archives to the public next year on the 100th anniversary of the 1915 incidents. However, the other countries have not been keen on opening and publishing their archives, while the Turkish Culture and Tourism Ministry founded a commission to find and translate archive documents into Turkish and English.