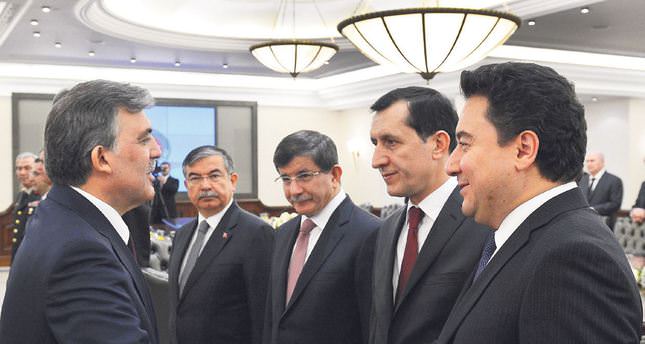 by Daily Sabah May 02, 2014 12:00 am
ISTANBUL — The national Security Council (MGK), bringing the country's top political and security leadership together, convened at the presidential residence under the leadership of President Abdullah Gül in Çankaya, Ankara on Wednesday for its monthly meeting to discuss factors posing an imminent threat to Turkey's national security. With an emphasis on the Gülen Movement, the meeting analyzed structures threatening law and order in the country and precautionary measures that should be taken to address them.

At the council's last meeting held in February, the discussion also centered on "structures and activities posing a threat to the national security and public order" of Turkey. The Gülen Movement and its activities were especially examined as an investigation was recently launched against Fethullah Gülen, the movement's leader who resides in the U.S in self-imposed exile.Gülen is being investigated for "conspiring against the armed forces, infiltration of the judiciary through Gülenist agents, partially or completely attempting to destroy the government of the Republic of Turkey or to obstruct its services," and "organizing and administering a criminal organization." The movement is allegedly behind the wiretapping of thousands of people including the prime minister, fabricated tape recordings discrediting the government, and a comprehensive defamation campaign against the government in efforts to bring it down.

The council also discussed current conflicts in the Middle East including Syria, and analyzed its implications and threats for Turkey's national security, as well as peace and stability in the region. Humanitarian assistance given to Syrians to provide for their needs was also reviewed at the meeting.In addition, under the scope of developments in the Middle East, the council comprehensively examined the current situation in Iraq and reviewed bilateral relations between Turkey and Iraq. It was stated in the meeting that finding a solution to the existing problems in Iraq could positively contribute to establishing peace and order in the region with the aid of the Iraqi general elections and under a democratic and constitutional framework.

It was also expressed in the meeting that Turkey is pleased with the agreement reached between Fatah and Hamas in Palestine, which is recognized as a necessary step for establishing unity between Palestinians.The reconciliation would also have a positive impact on peace talks between Palestine and Israel, and permanent peace and stability in the Middle East.

The council further expressed its concern over the mass execution order in Egypt and stated that it hopes to see the order repealed in the best interests of the Egyptian people. The meeting also addressed the current crisis in Ukraine and Russia and the region as a whole, and evaluated the potential implications of the current crises there for Turkey and Crimean Tatars.

Those attending the meeting were presented with information about the defense reforms initiated by the president in line with regional and global developments in the field of security. Among the attendees were Prime Minister Recep Tayyip Erdoğan and ministers who are members of the MGK, while Necdet Özel, chief of the Turkish general staff, was represented by Hulusi Akar, the chief of the army, and other commanders from the armed forces as Özel was unable to attend the meeting.