Singapore and Turkey rediscovering each other 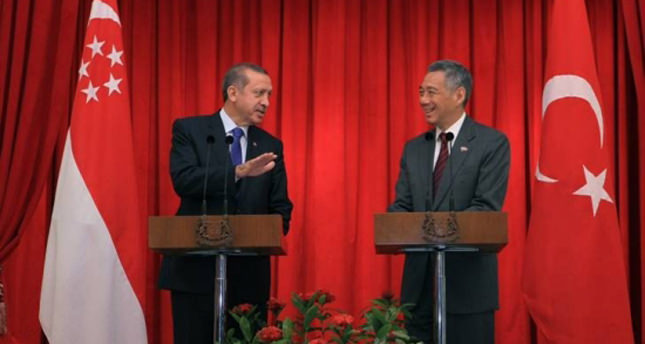 Singapore, the first ally of Ottoman Empire in Southeast Asia wants to improve the bilateral relations in terms of trade budget. Daily Sabah spoke to Singapore Ambassador Lee on the two countries' relations

ANKARA — Singapore is a sunny, tropical island in Southeast Asia, off the southern tip of the Malay Peninsula. The city-state is 710 square kilometers and inhabited by 5 million people. Although small in size, Singapore commands an enormous presence in the world today with its free trade economy and highly efficient workforce. Also, its strategic location in the region has enabled it to become a central seaport along major shipping routes. Turkey's relationship with Singapore goes back to the 19th century. The first Ottoman diplomatic mission in Southeast Asia was launched in 1864 in Singapore. Although there are gaps in the timeline of the two nations, officials of both countries are working hard to rekindle an old friendship. Singapore has 49 overseas missions, and the country established its Embassy in Ankara, Turkey, in July 2012. The Embassy is headed by Chargé d'Affaires Lorling Lee.

According to Lee, Prime Minister Recep Tayyip Erdogan's visit in January 2014 marks the high point of the growing relationship between Singapore and Turkey. Moreover, in the past two years, there have been regular exchanges among Turkish and Singaporean deputy prime ministers, foreign ministers, trade ministers and parliamentarians. "We are happy that our relationship is growing. Singapore views Turkey as an important partner that straddles both Europe and Asia. It can be a gateway to both regions. Likewise, Singapore can be a gateway for Turkey into the Asia Pacific region," said Chargé d'Affaires Lee.

Regarding developing relations, Lee indicated that they welcome further development of economic and trade ties: "Our two prime ministers have instructed our economy ministers to start negotiations on a comprehensive Turkey-Singapore free trade agreement (FTA). We are also ready to work together to enhance our bilateral air links," she added.

In conjunction with Prime Minister Erdoğan's visit to Singapore, International Enterprise (IE) Singapore, the Singapore Business Federation and the Turkish Ministry of Economy held the third Turkey-Singapore Business Forum. Singapore's minister for trade and industry and the Turkish minister of economy addressed the forum. There was also a panel discussion on infrastructure opportunities in Turkey and Singapore companies' experience in doing business there. The business forum provides a platform for Singapore and Turkish business leaders to meet, network and gain insights into economic developments, as well as business opportunities in both countries.

Singapore is strategically located at the center of Asia, a fast growing region. Moreover, Lee believes that a new renaissance is taking place in Asia, and this renaissance is underpinned by the shift in the world economic center to Asia. ''Singapore will leverage existing fundamentals and continue to build our capabilities to strengthen our position as a hub, linking companies to Asia and the rest of the world,'' Lee said.The chargé d'affaires also underlined that Singapore can serve as a springboard to the rest of Asia for Turkey. "Our capabilities complement Turkey's global ambitions and your businesses' desire to do more with the rest of the world beyond your immediate neighborhood.Singapore can serve as a springboard to the rest of Asia and support Turkish businesses' efforts to innovate and commercialize new solutions. Similarly, Turkey is increasingly perceived as a hub of East Europe, North Africa and the Middle East. The growing intensity of Singapore-Turkey relations is important not only for our two countries, but it also opens doors to third countries in our respective regions," she added.Touching on the issue of specific areas of cooperation, Lee underlined that there are many opportunities for business collaboration, but also emphasized the importance of the construction, energy and transport sectors. "Singapore and Turkey businesses can also focus on the automotive sector, urban and industrial planning and development and environmental infrastructure. The value of Singapore companies' value proposition to Turkish companies would be their globally competitive products and services, extensive international experience and network. Turkish companies with their entrepreneurial spirit and regional hinterland access will complement Singapore companies well,'' Lee commented.

Regarding the question of how relations can be developed, Lee noted the importance of increasing the level of awareness and knowledge that we have of each other. ''Physical distance is of course no longer a big problem in today's world. Mental distance is more difficult to overcome. One of the key tasks of the Singapore Embassy in Ankara is to promote and support activities that will increase the mindshare of each country with the other, which would help increase trade and investment and cooperation in other areas of shared interest. We should leverage each other's strengths as hubs and gateways to our respective regions. Singapore is involved in regional initiatives like APEC (Asia Pacific Economic Cooperation) and ASEAN (Association of Southeast Asian Nations) and serves as an important business hub of Southeast Asia. We welcome Turkey's interest to step up its engagement with ASEAN.''

Singapore and Turkish companies can seize the many opportunities in dynamic Asia and prosper together. In fact a group of Turkish companies have already established themselves in Singapore. Among these is Opet Trade, a unit of gas oil and gasoline distributor Opet Petrolcülük. Another little known fact is that Singapore's Formula One night race is illuminated by a Turkish generator company, Genpower. There are also a growing number of Singapore businesses venturing into Turkey including the Port of Singapore Authority (PSA), Phillips Securities and Jurong Consultants. PSA International and Akfen Holding have been in a joint venture to operate the Mersin international Port since 2007. Singapore-based Jurong Consultants completed the first phase of the master plan for the development of the Petkim Peninsula for Petkim PetroKimya Holding A.Ş. in 2010.PhillipCapital, a Singapore-based finance house, became the first Asian company to be listed on Borsa İstanbul after it acquired Istanbul-based securities and futures brokerage company Hak Menkul Kıymetler in 2012.The Singapore Exchange and Borsa Istanbul signed a memorandum of understanding in September 2012 to promote investment opportunities and share knowledge and information.

Singaporean mission head Lee also drew attention to the fact that a high quality comprehensive FTA will put the two countries' growing trade and economic relationship on an even firmer footing.