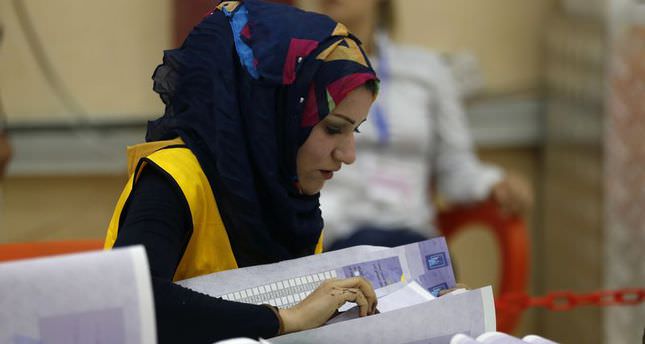 by Daily Sabah May 03, 2014 12:00 am
ISTANBUL — While waiting for the results of the Iraqi general election due on April 30, its consequences are expected to have a significant impact on the ongoing local disorder and relations between Turkey, the incumbent Baghdad government and the Kurdish Regional Government (KRG).

Despite the sectarian tension and militant activities against Prime Minister Nouri al-Maliki and his government, the Iraqi people managed to reach the polls and vote to determine their countries' uncertain future. This was the first democratic election held in the absence of foreign troops.

However, in the heavy political atmosphere, forming a new government will take time. It is expected that no single party will win the majority of the 328 seats in the Council of Representatives due to the suffering from ethnic and sectarian wars. Many militant attacks have occurred in certain parts of the country's north and the west, particularly in the Sunni Anbar province, which is the only Sunni-dominated province in Iraq. Many local Sunni tribes raised their voice against al-Maliki, while accusing him of having centralist and authoritarian tendencies. The overall political situation in Iraq shows that Sunni-Arab groups, Kurds and other sectarian groups have no trust in al-Maliki and his government.

Rivalries exist between al-Maliki's State of Law bloc, two major rival Shiite groups and other Sunni and Kurdish parties.
The final result of the election is not clear yet, but the ostensible result would prove that if al-Maliki manages to secure his third term, Iraq would likely enter a more serious phase with much political turmoil ahead.

If Maliki wins re-election, political turmoil is quite likely to increase, leading to increasingly violent attacks from militant Sunni groups and the Islamic State of Iraq and the Levant (ISIL). Apart from these attacks, Sunni Arab groups would lose their influence on Iraqi politics, resulting in more tumultuous bilateral relations between Turkish and the Baghdad government. Othman Ali, a professor at Salahaddin University, points out in an article the possible results that would harm Turkey's relations if al-Maliki wins re-election: "(It) will prolong the war in Syria and serve as a major obstacle to Turkey's attempts to stabilize relations with Iran and Arab countries. Furthermore, there is no love lost between Maliki and Turkey's Prime Minster Erdoğan."

Any possible deteriorating impact of the elections on relations between KRG President Masoud Barzani and al-Maliki is also increasing Turkey's concerns over Barzani's decision concerning the sale of oil stored in Turkey independently of the central government and the depositing of Kurdish oil revenue in a Turkish bank. This could enable Turkey to become more competitive in the energy sector. Barzani's statement about selling oil starting from May 2 is already raising concerns in Turkey over this significant matter. However, no explanation has come from either party yet.