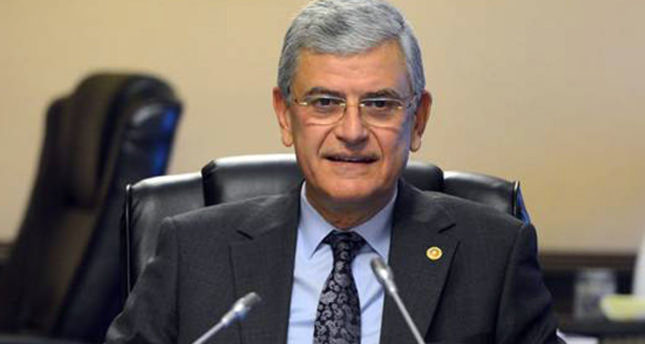 European Union accession chapters would have been opened if politically motivated obstructions had not been placed. Moreover, opening new chapters does not have a direct impact on the Turkish economy anymore, says Volkan Bozkır

Bozkır dedicated years to foreign policy before being elected a member of parliament. He served as an EU Secretary General and Permanent Representative to the EU in Brussels. Daily Sabah sat down with Bozkır to discuss the role of the Foreign Affairs Commission, and current foreign affairs from Crimea to the EU accession process and Syria.

What is the Foreign Affairs Commission? Can you explain its mandate?

The developments in Ukraine and Crimea continue to dominate headlines. How does Turkey evaluate the situation?

As Turkey, we view the subject as follows. Firstly, Russia is an important neighbor and a strategic partner both politically and economically. Russo-Turkish relations have perhaps never been as good in the past 300 years as they are now. Our prime minister and Russian Prime Minister Putin maintain a very good relationship.

At the same time, Ukraine is also a neighbor and strategic partner of Turkey. We place importance on Ukrainian sovereignty and territorial integrity. We cannot accept a partition of Ukrainian territory that will be dependent on Russia that is in contravention of international law.
Furthermore, Crimea is in a crucial position for us. We share kinship with the Crimean Tatars. They have relatives in Turkey. For Crimean Tatar Turks to continue to live on their ancestral land with a sense of security and their status protected as well as have their rights and interests widened, all the while not coming to any harm during this disarray, is of great importance to us. A solution to the Ukrainian crisis, founded on international law and implemented through diplomatic channels is how we would like to see this crisis come to an end. Turkey does not recognize the annexation of Crimea. For there to be a permanent solution to the crisis and for the rights of Crimean Tatars to be thoroughly defended maintaining dialogue with the Russian Federation is beneficial. As a result we have not joined the EU, U.S. and various other countries in implementing sanctions against Russia. I would like to stress that from the perspective of the Foreign Affairs Commission, our opposition parliament members also support our Crimea policy.

As someone who has observed Turkey's EU accession process closely, what is your evaluation of the current state of Turkey-EU relations?

Yes, as you have already stated, for 11 years I served as a top-ranking bureaucrat in the Ministry of Foreign Affairs and the EU Secretary General. During this period, I was in fact present at Turkey's EU negotiations process and the opening of 13 chapters. Consequently, the EU project is very close to my heart.

When considering Turkey-EU relations, Turkey has not had any shift in policy and maintains EU membership as a strategic aim. However, it is possible to observe a change in the EU's attitude to Turkey. The EU's inability to digest its expansion over the past 10 years is a key reason for this shift. The EU, until recently, was always a center that attracted others with its political vision. The EU offered an economic welfare and members enjoyed economic benefits, all of which are highly desirable for all countries. However in today's EU we see that new member countries are not able to supply funds as they are lacking in economic power and are not able to resolve their own internal problems. The EU's own slow decision-making process prevents it from being able to act swiftly and decisively in times of crisis.

Underlying the problems that currently plague Turkey-EU relations is the EU's inability to digest its own expansion process?

This is one of the factors. In addition to this, in the EU decision making mechanism, the attributed number of votes is based on a country's population and area. For example, both Germany and France have 29 votes, Croatia has six. It is possible to block a decision with 91 votes. When Turkey becomes an EU member it will possess 29 votes and along with the other two largest countries will determine the agenda of the EU.

Turkey will have 100 parliamentarians in Brussels. Many EU countries do not seem ready for this. The EU determines its relationship with Turkey on the 1963 Ankara Agreement. In 1963 Turkey was a country with an income per capita of $400. In this context, EU membership was seen in the same light as many former Soviet Bloc countries approached it, membership must be obtained whatever the cost. However, when we look at today's Turkey we see a country that has a national income of $820 billion and income per capita of $11,000. The Maastricht criterion is the basis required to be able to move into the Euro, Turkey is the only country within the EU that fits the economic indicators. Therefore, EU membership for Turkey is no longer about economic interests. The meaning of the EU for Turkey today is from food security to environment, protection of intellectual property, about attaining higher standards that will add to our quality of life in many different areas.

When we consider the political and economic reforms that have been undertaken in Turkey, we can say we don't have far to go before we reach the said standards.

Do you find the recent criticisms of Turkish rule of law and democracy from European institutions misplaced?

In order to have a right, you must first honor the obligations of that right. They are acting as though Turkey has taken its first steps towards EU membership today.

In order to begin negotiations, Turkey had to comply with EU founding principles and did do through multiple political reforms. Turkey began negotiations with the EU as it complied with the Copenhagen political criteria. In the criticisms these reforms are completely forgotten.

What we are saying is that if the EU is erroneously concerned with the judiciary, human rights or freedom of expression in Turkey then open chapter 23 on Judiciary and Basic Rights and let us review the standards.

However, the EU refuses to open this chapter. We as a country have signed an agreement of return. We are combating illegal migration and taking steps to bring our border security on par with the EU. Despite this, the EU will not open chapter 24 on Justice, Freedom and Security for negotiation. Thus the annual EU Progress Reports on Turkey have gone from being exciting reads to repetitive texts. Since the EU is not engaged in negotiations with Turkey in a swift manner, the EU is beginning to lose the chance to influence through criticism. However, we continue to resolutely pursue the political and economic reform process.

Are you expecting any new chapters to open in the second half of 2014 under the Italian presidency?

The opening of new chapters no longer impacts life or the economy of Turkey as it once did. For three years, until last year, not a single chapter was opened and we all saw that were was no negative impact. Even though the EU has not opened all of the chapters, Turkey has. And we plan to close them soon.

Are you saying that we are continuing reforms even if the EU does not open chapters?

Let me summarize as follows: When starting negotiations the EU has a review process. During this process the regulations of the candidate country and that of the EU (Acquie Communataire) are compared and the Commission publishes a report. When a chapter is opened, the negotiations are undertaken to bridge the differences. The arrangements required by the candidate country are outlined in the Commission's report.

Furthermore, the opening and closing criteria are set out in this report. After every chapter, the Commission's reports are handed to us either officially or unofficially.

Thus, we are able to do what is necessary even if the chapters are not opened for negotiation.

Considering there are a total of 33 headings (two headings are not being negotiated), it is evident that we are not far off from full EU membership.

The Greek Cypriot Administration of Southern Cyprus is one of the EU member states that is blocking chapters. Will the new round of negotiations in Cyprus have a positive impact on Turkey's EU accession process?

It is not logical for Turkey's EU accession to be slowed on the grounds of Cyprus given that Turkey is a member of the customs union and has a trade volume of $200 billion with the EU. In this context we view countries that use Cyprus as an excuse as trying to prevent Turkey from joining the EU.

Can you give concrete examples of which EU member states are blocking Turkey's EU accession?

For example Germany, France, Austria and such countries have made it known they do not want Turkey as an EU member state. However, rather than risk their bilateral trade ties with Turkey by stating so outright, they fashion their objections as the Cyprus problem and obstruct the accession process. As soon as the Cyprus problem is resolved, the countries that do not support Turkey's membership of the EU will become clear.

What do you make of the normalization process of Turkish-Israeli relations?

I would first like to stress this: Turkey has no fundamental problems with Israel and Jews. For years during the AK Party era there were close ties integrated with multifaceted mutual interests. The turning point came with Israel's attack on Gaza killing civilians and the nine Turkish citizens on the aid flotilla headed to Gaza.

Currently, Israel's apology and agreement to pay monetary compensation are important steps. The removal of the blockade on Gaza and allowing humanitarian aid would allow for full diplomatic ties to be restored
and relations to return to normal.