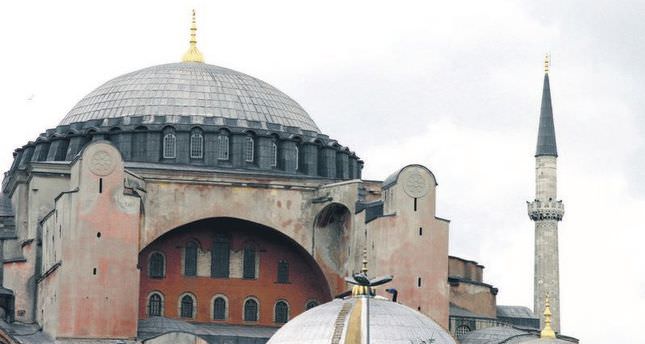 by daily sabah
May 06, 2014 12:00 am
ISTANBUL — Numerous supporters of controversial imam Fethullah Gülen recently started a campaign on Twitter calling for the Hagia Sophia to be reopened as a mosque. The move, which is also being supported by numerous politicians, has been questioned by others who note that Gülenists purport to promote dialogue and tolerance toward other faiths.

Recently Hami Yıldırım, a parliamentarian from Burdur who stepped down from his position at the AK Party and became an independent, submitted an official request to the Turkish Parliamentary Speaker's Office to reopen the Hagia Sophia as a mosque for Muslims to worship.

This move was criticized by Bülent Turan, an AK Party parliamentarian from Istanbul, who claimed Yıldırım was "trying to [take credit]" in the event the mosque is opened for prayers. Ahmet Taşgetiren from Star newspaper has noted the move is extremely risky for the Gülen Movement as it endangers the ideology of "dialogue" with other religions which they claim is a cornerstone of their views.

Others have claimed the campaign's timing signals other motives as it came on the agenda right before the presidential election. Taşgetiren says that the Hagia Sophia should be reopened as a mosque but Turkey currently does not possess the power to do it or maintain it as a house of worship.

Deputy Prime Minister Bülent Arınç in a recent press statement said that the government is not likely to make such important decisions solely based on a social media campaign as it may have consequences and negative implications.

The Hagia Sophia was constructed in 537 as a Greek Orthodox Church in Istanbul and served as an Eastern Orthodox Cathedral until 1453 when Istanbul was conquered by the Ottoman Sultan Mehmed II who converted it into a mosque.