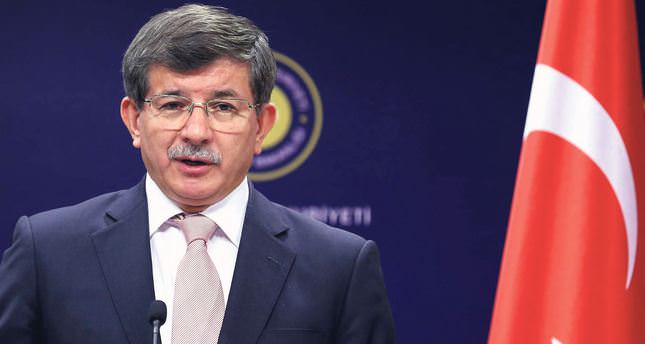 Turkey's Foreign Minister Ahmet Davutoğlu denounces the Gülen Movement and its illegal activities against the Turkish government, stating that the movement's desire is to have a voice in government

ANKARA — In an interview with Turkish newspaper Sabah, Foreign Minister Ahmet Davutoğlu commented on the ongoing political issues in Turkey, including the Gülen Movement's infiltration of the police and judiciary with the aim of toppling the government. The movement is headed by U.S.- based controversial imam Fethullah Gülen who is currently residing in Pennsylvania in self-imposed exile.

Harshly criticizing its smear campaign against the Turkish government, Davutoğlu denounced the Gülen Movement as being behind the illegal wiretapping scandal that saw key governmental figures' phones tapped and conversations leaked to the media.

Touching on another wiretapping scandal in March that saw certain illegal organizations tap and leak a top secret meeting in which Davutoğlu and top security officials discussed a possible military operation in Syria, Davutoğlu said, "The Gülen-affiliated Journalists and Writers Foundation [GYV] that made statements on almost every issue in Turkey did not say a word after the wiretapping scandal at the Foreign Ministry. After a while, they started to say that they did not tap [the ministry conversation]."

Referring to the Feb. 7 operation of the Gülen Movement against the Turkish National Intelligence (MİT), the foreign minister pointed out that during that operation the true motives of the movement were revealed, but Turkish Prime Minister Recep Tayyip Erdoğan accepted it just for the sake of Turkey's peace and security. Davutoğlu stated that the movement has no legitimacy following its attempts to overthrow the government by infiltrating the judiciary and state bureaucracy.

On Feb. 7, 2012, Istanbul's specially authorized prosecutors, Sadrettin Sarıkaya and Bilal Bayraktar, who are considered followers of the Gülen Movement in the judiciary, issued a summons for MİT chief Hakan Fidan for his cooperation with the administrative structure of the Kurdistan Workers' Party (PKK) and the Kurdish Communities Union (KCK).

Regarding the ongoing allegations that Fethullah Gülen may be extradited to Turkey, Davutoğlu said, "This [what the Gülen Movement has done] is a crime against the legitimacy of the state. Necessary investigations will be launched and after they reach a certain phase, certain steps are expected in this regard."

Slamming the Gülen Movement's reaction to the Israeli attack on the Mavi Marmara, a ship in a flotilla carrying humanitarian aid and construction materials to the Gaza Strip, which resulted in the killing of eight Turkish nationals and an American of Turkish origin in international waters by Israeli commandos, the foreign minister said, "They [the Gülen Movement] asked why the ship stood against Israel's authority instead of asking for permission to sail toward the Gaza Strip and they described their reactions as a reflection of their
positive thinking.

This is their argument. Then, why do you accept Israel's authority, but disregard the Turkish government's authority that was supported by most Turkish citizens on March 30 [local elections]?"

When asked what the motive was behind the movement's activities, Davutoğlu pointed out that they desire to have a voicein the government.

Accusing the movement of carrying out a defamation campaign against Turkey, Davutoğlu said the movement complained about Turkey in every international platform and carried out activities against the country. Touching on the Gülen Movement's efforts to show Turkey as an affiliate of illegal terrorist organizations in international platforms, Davutoğlu said, "Who benefited from portraying the Turkish government elected by the will of the nation as an ally of illegal organizations? [Surely the smear campaign] strengthened the Syrian regime's hand against Turkey at the Geneva talks."

Davutoğlu continued, "The nation raised its voice in the March 30 local elections by going to the ballot box and the nation said that 'only those I choose have the right to engage in politics.' This is the summary of the March 30 local elections. This is the message of the nation."
Regarding the politically-motivated report by U.S.-based watchdog Freedom House stating that Turkey's press freedom was demoted from "partly free" to "not free,"

Davutoğlu reiterated that most of the countries described as "not free" in the report are countries that don't even have free elections.
He said, "Turkey has just completed an election process. Each ideology had a voice on every platform. For months, more than half of the Turkish press had an anti-government attitude. They published news against the prime minister and us [the AK Party]. They
were not censored."
RELATED TOPICS