AK Party to hold summit in Afyon to plan future 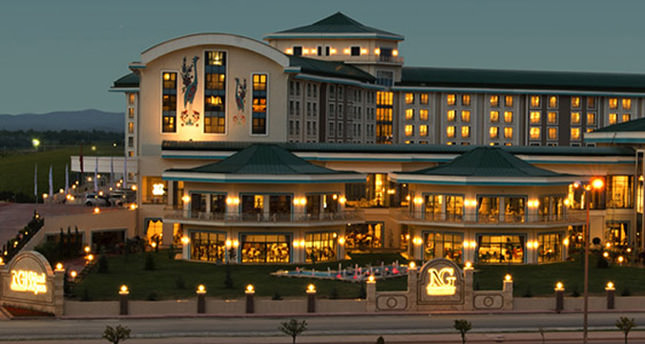 On the eve of presidential elections destined to change Turkey's political landscape, the AK Party will gather in Afyon to discuss its future

AFYON — The ruling Justice and Development Party (AK Party) executives will gather in Afyon tomorrow for a three-day summit to plot the future of the party. Prime Minister Recep Tayyip Erdoğan has called on AK Party members to not bring their wives and families.

The meeting will be held in a hotel in Afyon instead of Kızılcahamam, as the hotel previously used for the occasion is affiliated with the shadowy Gülen Movement.

Taking into consideration security concerns that arose after the Gülen Movement used unlawfully obtained audio and video recordings for extortion and threatened a number of officials, Melih Gökçek, the mayor of Ankara, has recently remarked that a former minister and his family were given the same room in a hotel where they went for vacation, implying their stay was illegally recorded along with a number of the AK Party's female parliamentarians who claimed they are not scared of any threats by video or audio recordings, as they have not done anything wrong, but were still threatened by video recordings containing private images obtained at such locations.

On the other hand, those who wanted to bring family members were told that their families could stay in other hotels around the region, and it was also stated police forces would physically be there and provide technical security against potential bugging devices and secret cameras.

Ministers and parliamentarians have expressed their concern about the fact that they have to take extraordinary precautions to protect their private lives and are disturbed by the atmosphere of tension and blackmailing by agents of the Gülen Movement.

Mustafa Şentop, deputy chairman of the AK Party, will make a presentation about the March 30 local elections, the upcoming presidential elections and the 2015 general elections.

Additionally, Interior Minister Efkan Ala will evaluate developments regarding the Gülen Movement and the reconciliation process when he will present comprehensive details about the events that took place after the Dec. 17 and 25 operations, an attempt by Gülenists to discredit the government. Bekir Bozdağ, minister of justice, is expected to discuss details surrounding legal procedures concerning the extradition of Gülen, as well as significant cases including the Sledgehammer and Ergenekon cases.

Union of Turkish Bar Associations President Metin Feyzioğlu recently panned the atmosphere of paranoia created by the Gülen Movement. Underlining the fact that groups affiliated with the Gülen Movement have based their policies on unlawfully recorded tapes, Feyzioğlu at a press conference in Erzurum remarked the "recording and exposure of the details of a meeting carrying the significance of a state secret clearly and openly indicates spying," and he went on to note these infiltrators could have well been involved in numerous spying activities when Turkish soldiers were martyred and engineers at ASELSAN (Military Electronic Industries), a Turkish corporation that produces tactical military radios and defense electronic systems for the Turkish Armed Forces (TSK), mysteriously committed suicide.

Feyzioğlu claimed the top secret meeting held at the Foreign Ministry about Syria was intentionally released with the aim of altering people's perceptions and choices prior to the March 30 local elections by Gülenists, who have been carrying out a defamation campaign against the ruling AK Party since the Dec. 17 operation through their media outlets.

The Gülen Movement is currently accused of illegally wiretapping thousands of people through Gülenist agents in the judiciary, police forces and other institutions in Turkey along with a number of other criminal charges. Judges, prosecutors and numerous public servants affiliated with the movement are currently being identified, investigated and tried for paying allegiance to a third party instead of the state and the Constitution. The government is considering issuing an extradition request for Gülen, the leader of the movement who is living in self-imposed exile in the U.S. and is accused of conspiring against the Turkish state.
Last Update: May 08, 2014 1:11 am
RELATED TOPICS