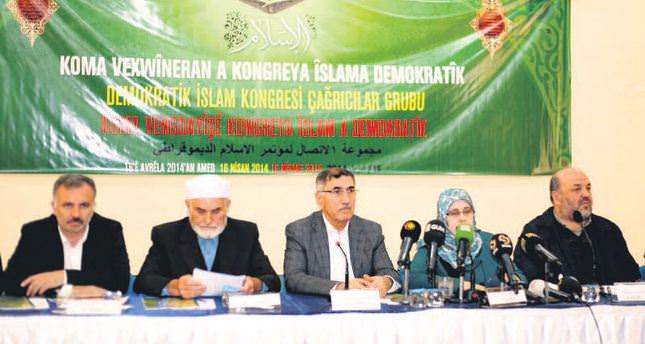 The Democratic Islam Conference organized by the People's Democratic Party (HDP), which was created based on the pro-Kurdish Peace and Democracy Party (BDP) but with the aim of having a more inclusive approach towards everyone, is scheduled to take place with the participation of around 300 Islamic scholars, academics, authors and experts on March 10-11 in Diyarbakır and has been criticized for a variety of reasons by many for being controversial. The conference was organized based on suggestions of Abdullah Öcalan, the imprisoned leader of the PKK, a militant Kurdish organization that signed a cease-fire with the government in 2013, but is still considered a terrorist organization by Turkey, the United States and EU. "

It is crucial to initiate such organizations by taking Prophet Muhammad's Medina council meetings in line with the spirit of historical figures such as Sheikh Said," Öcalan recently stated. According to Güler Doğu Özavcı, the co-chair of the Hazro Municipality, the main purpose of the conference is to talk comprehensively about Islam rather than talking with Kurds about Islam and appeal to a wide range of people throughout the region and the European and Western part of Turkey. Referring to the Medina Pact signed during the period of Prophet Muhammad, Özavcı indicated they would like to discuss and reveal the fact that the multi-cultural/lingual system that existed back then could also exist now.

The main motive behind the organization of such a conference is claimed to be the high number of religious Kurdish people who vote for the Justice and Development Party (AK Party) in southeastern Turkey, which was revealed in the recent local elections that took place on March 30.

Özavcı opposed this claim, saying, "The Middle East is a blood bath, and we wanted to show that Islam is a religion of peace and justice," and he went on to claim that the conference was a unique organization not affiliated with any parties or ideologies. Critics argue that the Kurdish movement following the line of Öcalan is taking into consideration potential votes by the country's religious Kurdish people who have been reluctant to support the PKK's ideologies, as they mostly promoted Marxism-Leninism, directly contradicting religious values.

Altan Tan, BDP deputy from Diyarbakır, in an interview with Daily Sabah responded to allegations that the HDP was mostly based on leftist and socialist parties, failing to properly represent the conservative wings that are planned to be built during the conference, and stated that time would tell the results of such claims.

Criticizing the HDP for not taking into consideration the base of religious voters, Tan claimed the HDP has failed to include Muslim democrats, liberals and a significant segment of the Kurdish people and limited itself to radical Turkish leftists.

On the other hand, Tan indicated that the most accurate way for the BDP to improve itself is to expand its voter base and attract voters who vote for the AK Party, along with liberals, democrats and others, which should be based on the first letter sent by Öcalan about "becoming a citizen of Turkey." Additionally, Tan has criticized the alliance established between the BDP and the HDP for being ineffective due to the fact that the HDP fails to appeal to all Kurds, which would not benefit the BDP.

However, Demir Çelik, BDP deputy from Muş, has stated that it is necessary for the HDP to overcome the leftist-socialist image created by leftist and socialist parties as a significant majority of society is religious/ conservative, and the party cannot expand or enlarge without taking this fact into consideration.

The PKK, which operated as a militant organization from 1984 to 2013 and has attacked numerous civilian and military targets resulting in thousands of casualties and signed a ceasefire with the government on March 21, 2013, was founded on Marxist-Leninist ideologies, which promote atheism as a fundamental tenet. This is mainly one of the reasons why critics argue the Democratic Islam Conference has not been organized with sincere intentions, as Kurdish leaders both militant and political have mostly ignored and frowned upon religion, whereas now they would like to take advantage of it for political interests. Recently, Mustafa Karasu, an executive member of the illegal Kurdistan Communities Union (KCK) organization and deputy chairman of the PKK, stated that the Kurdish movement in Turkey would no longer utilize violent means for their struggle or try to establish a Kurdish nation state.