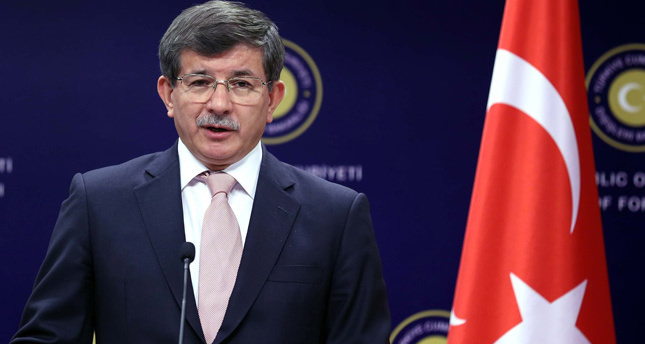 by AA May 09, 2014 12:00 am
ANKARA — Turkish foreign minister said the facts regarding the number of journalists imprisoned in Turkey were incorrectly reported in a recent U.S. non governmental report.

The report by U.S.-based advocacy organization Freedom House, claiming Turkey suffered a "significant decline" in press freedom, is not an objective report, said Ahmet Davutoglu on Friday. Speaking during a press conference after the 29th meeting of the Reform Watch Group that observes the process of Turkey's accession to the EU, Davutoglu said there were "serious differences" between the figures of Freedoom House and Turkey's Justice Ministry.

"There are only 5 imprisoned journalists with press cards and they are in prison on different charges, not because they are journalists," he said. However, according to the report, there are 44 imprisoned journalists. He slammed the report for ranking Turkey alongside North Korea in terms of press freedoms. "If Turkey takes place in the same category as North Korea, no one can call it objective...This is an insult not just to the government but also to the standards Turkey has achieved," he added. Meanwhile, Turkey's Minister for EU Affairs, Mevlut Cavusoglu reiterated his call for the opening of Chapters 23 and 24 on "judiciary and fundamental rights" and "justice, freedom and security" respectively.

The chapters form the basis of accession negotiations for each country to the EU. They focus on areas which require reforms in order to meet accession conditions. He also urged the EU to lift the political blockage on Turkey's EU talks. "To be honest, If we say that we want to join the EU within a year, this is not a realistic approach, but we can take very important steps together in a year." Established in 2003, the Reform Watch Group includes ministers and officials from the Foreign Ministry, the EU Affairs Ministry, the Justice and the Interior Ministry.