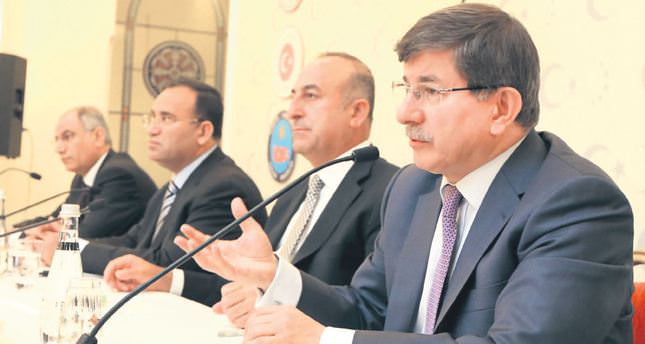 by Daily Sabah May 10, 2014 12:00 am
ISTANBUL — A Reform Monitor Group (RİG) meeting was conducted on Friday under the leadership of Turkey's European Union Minister and Chief Negotiator Mevlüt Çavuşoğlu. Participants included Minister of Foreign Affairs Ahmet Davutoğlu, Minister of Justice Bekir Bozdağ and Interior Minister Efkan Ala, who attended the three-hour meeting to discuss the details of Turkey's current stance in its bid to become a member of the European Union.

Indicating that Turkey has informally fulfilled the 23rd and 24th chapters of the membership process that mainly involve political criteria under the title of "Judiciary and Fundamental Rights," Çavuşoğlu claimed the process was being blocked for political reasons and called on the European Union to open these chapters. "We're doing our part and will continue to do so," said Çavuşoğlu, who demanded the same understanding from the EU and stated there are a number of agreements signed by Turkey that have not been approved by the Parliament. According to Çavuşoğlu, the certification process of these agreements would be expedited along with numerous draft laws regarding the democratization package. On the other hand, Çavuşoğlu touched upon the fact that there has been significant progress in terms of reforms made in the judiciary, reducing the workload of the courts as well as the number of detainees in prisons, which has dropped to 14 percent, a figure that surpasses a number of European countries.

It was stated that the third and fourth judicial reform packages have brought Turkey's restrictive expression and press freedom provisions in accordance with international human rights standards and Çavuşoğlu noted that they would continue in a determined fashion to take the necessary precautions under the scope of European human rights agreements, producing concrete results. More importantly, the fact that the number of people applying to the European Court of Human Rights (ECtHR) has dropped significantly to 11,000, positively dropping Turkey's ranking to fifth in line was appreciated, as Turkey used to be the country with the second highest number of applicants.

More progress has been achieved according to Çavuşoğlu in terms of the Justice Ministry's initiatives regarding the approval of the necessary provisions for improving the rights of the disabled through the Protocol about the Rights of the Disabled. In addition, the meeting also discussed details concerning a proposal demanding harsher penalties for child abusers as well as providing protection for victims of violence, which would be sent to the Turkish Grand National Assembly for approval.
Last Update: May 10, 2014 1:12 am
RELATED TOPICS