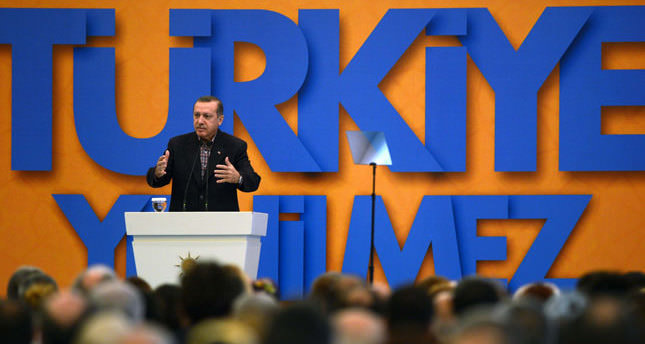 Speaking to AK Party members during a summit in Afyon, Prime Minister Erdoğan said popular vote for president strengthens democracy and added that the system of government now is presidential

ISTANBUL — Inhis speech at the Justice and Development Party's (AK Party) 22nd Consultation and Evaluation Meeting, Prime Minister Recep Tayyip Erdoğan commented on the upcoming presidential elections as well as the implications of the March 30 local elections for the future of Turkey. He also criticized Metin Feyzioğlu, the president of the Turkish Bar Association, for his controversial and politically charged speech at the 146th anniversary of the Council of State. The mechanism for the election of the president in Turkey is currently experiencing a new phase, as the president will be elected by the people rather than the Turkish Grand National Assembly (TBMM). Touching on the longdiscussed presidential system, the prime minister said, "Turkey has already switched to the presidential system."

Erdoğan berated the Republican People's Party (CHP) for criticizing the new election method as the party also opposed the change in the past. "Whereas the president was the representative of the national will, the CHP has put him/her in a position representing tutelage, status quo and bureaucracy after the May 27 coup when they realized they cannot be elected by the people," said Erdoğan, who claimed that the role of the president has been damaged but the constitutional amendment of 2007 will allow for a more democratic procedure. The election of the president by the Parliament was a legacy of the coup d'état, which significantly narrowed the political sphere of the country and limited the resolution of conflicts.

On the other hand, Erdoğan stated that his party is currently in the process of choosing its presidential candidate through an intense period of consultation and evaluation with the participation of the administration, parliamentarians, mayors, local administrators as well as women's and youth branches. The candidate will be announced in the first half of June.

Noting that the recent local elections were particularly challenging but the AK Party came out triumphant, Erdoğan said the Dec. 17 and 25 operations that saw officials affiliated with the Gülen Movement initiate a corruption probe against a number of ministers and their sons in efforts to discredit the government was aimed at modifying Turkey's future, according to newly revealed details. "If these operations succeeded, my cabinet, coworkers, AK Party administrators and members, journalists and I would be put on trial in courts similar to the one in Yassıada," Erdoğan said, referring to when former Turkish Prime Minister Adnan Menderes and his cabinet were hanged in 1961. He explained that new findings suggest a Bill of Indictments was prepared referring to Erdoğan as the "Prime Minister of the time," indicating a judicial takeover of the democratically elected government and replacing it with a coalition composed of the CHP, Nationalist Movement Party (MHP) and infiltrators within the AK Party.

Referring to the exploitation of the youth by coup-supporters, Erdoğan remarked that those who support the coup do not even bother coming up with new methods to achieve their goals, which can easily be seen by looking at the Sept. 12 and Feb. 28 coups and the Dec. 17 operation. "We watched another theater performance today at the Council of State," Erdoğan said, criticizing the speech of Metin Feyzioğlu who was only given 15 minutes but took an hour to finish his politically charged speech, strictly criticizing the government in the manner of a political party leader and upsetting a number of guests as well as the Council of State. Calling on Feyzioğlu to remove his gown as the president of the Turkish Bar Association, Erdoğan responded to the allegations put forth by him. For instance, Erdoğan underlined the fact that Feyzioğlu presented false and misguided information about the earthquake survivors in Van as well as the government's rebuilding initiatives there, greatly undermining its efforts. "Since the earthquake, we have contributed TL 5 quadrillion to Van," said Erdoğan, slamming Feyzioğlu's false claims that the government has turned a blind eye to the needy.

Numerous officials have criticized Feyzioğlu's speech and stated that the prime minister's criticism was justified. Bekir Bozdağ, the minister of justice, said that Feyzioğlu's speech was disturbing in terms of its content and went way beyond the allotted time of 15 minutes. His speech surpassed one hour, whereas the president of the Council of State took only 25 minutes.

Main opposition Republican People's Party (CHP) Vice President Faruk Loğoğlu harshly criticized Feyzioğlu's remarks, saying he exceeded the time allotted for his speech and showed disrespect for participants. Loğoğlu pointed out that Feyzioğlu's speech was politically motivated, adding that the platform where he spoke is not suitable for such speeches. The Council of State recently issued an official statement condemning Feyzioğlu's speech for being a political motivated one, disturbing the guests, being irrelevant to the order of the day, and damaging the reputation of the host institution and members.
Last Update: May 12, 2014 2:06 am
RELATED TOPICS