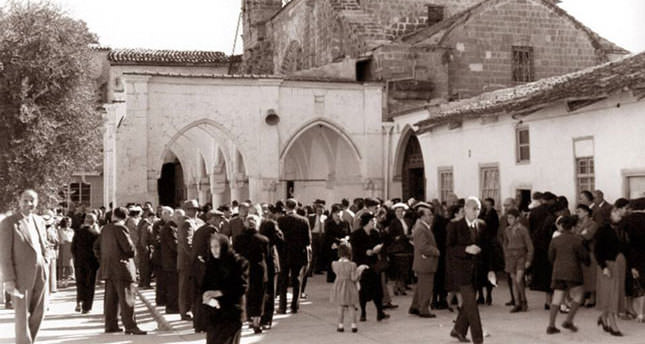 by AA May 13, 2014 12:00 am
NICOSIA — Sunday's mass at the Armenian Church on the Turkish side of the island was the first in half a century. The Armenian community in the Turkish Republic of Northern Cyprus on Sunday held its first church service in fifty years. Around 500 Armenians coming from the Turkish Cypriot and Greek Cypriot sides of the island gathered at the Armenian Church in the capital Nicosia to attend the ritual led by Archbishop Varoujan Hergelian. The service was also attended by Lisa Buttenheim, the U.N.'s special representative in Cyprus, and Şevket Alemdar, imam of the Hala Sultan Mosque, along with a number of diplomats. "I graduated from the school near the church. These places were home to us. We are home now," one of the participants of the service, Gora Terziyan, told Anadolu Agency.

She expressed hope that such steps would contribute to the peace process on the divided island. The island of Cyprus has remained divided into Greek and Turkish zones since a Greek Cypriot coup was followed by a Turkish peace mission to aid Turkish Cypriots in the north in 1974. The Greek Cypriot administration is a member of the European Union and is internationally recognized, except by Turkey, which is the only country that recognizes the Turkish Republic of Northern Cyprus. Another participant of the service, Gula Kasabiyan, said the day was of particular significance as being able to hold the service after half a century was evidence that the issues between the two populations of the island could be settled. "We should always look beyond for peace," she added. The Armenian Church hosting the historic rite was allocated to the Armenian population of the island back in the Ottoman era. However, it was abandoned by Armenians in 1964. Since then, the church went to rack and ruin but was renovated in 2010.
RELATED TOPICS