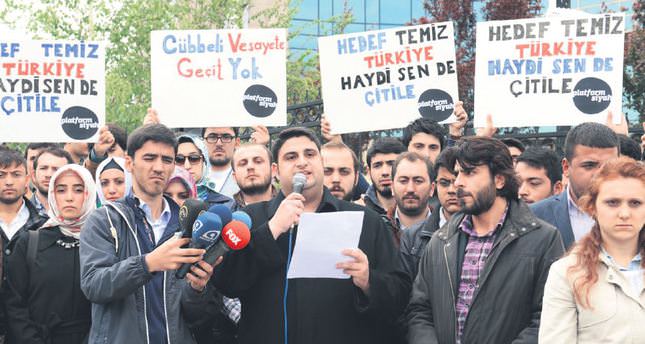 Figures in Turkey's government and nongovernmental organizations have continued to level criticism against the head of the Turkish Bar Association Metin Feyzioğlu's controversial and politically charged speech that led to a heated verbal exchange between him and Turkish Prime Minister Recep Tayyip Erdoğan at the 146th anniversary of Council of State on Saturday. The speech is seen by some as Feyzioğlu's efforts to make a name for himself before he tries his hand at politics.

Causing a stir across the country, members of Platform Black protested against Feyzioğlu's speech and gathered in front of the Turkish Bar Association displayed an attention gripping protest by washing a gown to symbolize the necessity of sweeping politically motivated speeches from the judiciary.

Speaking on behalf of Platform Black, Tarık Şebik said the Turkish nation does not need to be lectured by a bar association that praised every coup d'état in the country's history. "Those who become tongue-tied at times that they need to protect the law cannot argue their way out by talking through others' hats at receptions, ceremonies," said Şebik. Calling on Feyzioğlu to be the voice of justice as opposed to a pro-coup mindset, Şebik noted that there is no authority above the will of the Turkish nation.

In the western Turkish city of Afyon, nongovernmental organizations condemned Feyzioğlu's speech and expressed their support for Erdoğan. Chanting "Say no to judicial tutelage," the group criticized Feyzioğlu's speech. Speaking on behalf of the platform, board member of Ensar Association Afyon Office, Lawyer Mehmet Akif Kurtulmuş accused Feyzioğlu of acting as a voice for opposition parties. "We [the platform] do not accept anti-democratic attitudes that they [certain figures like Feyzioğlu] displayed even though they are not political actors," said Kurtulmuş.

The Turkish Foundation for the Handicapped Chairwoman Zilfinaz Abedan issued a written statement regarding Feyzioğlu's speech in which she asserted that all accusations against the government and the prime minister are baseless. She also stated that Erdoğan has made huge contribution to the developments in favor of disabled individuals in the country since he took office. She added that scholarships, dormitories and transportation facilities have been provided to disabled citizens. Accusing Feyzioğlu of using disabled individuals for his own interests, she asserted that Feyzioğlu did not respond to requests by social responsibility projects. "We [the foundation] condemn Feyzioğlu due to his speech using disabled people for his political interest and false statements regarding Prime Minister Erdoğan," added Abedan.

On Saturday, Feyzioğlu criticized the government on numerous issues, including the Twitter ban, Labor Day's protests and the Dec. 17 operation orchestrated by the Gülen Movement in order to overthrow the government. Feyzioğlu stated that there will be no justice in courts if they are politicized. He said, "the recent administrative and judicial bans on social media that echoed with repressive mindset in previous times is against the constitution, European Convention of Human Rights and legislations on online publishing."

On Labor Day's protests, Feyzioğlu stated that barring protesters from entering Taksim square as a security measure during Labor Day is against the constitution and paved the way for provocateurs to clash with police and citizens. Feyzioğlu further touched on the Van earthquake which claimed the lives of hundreds of people and injured more than 2,500 in 2011 by asserting that people have been living in container houses. On Sunday, Van Governor Aydın Nezih Doğan criticized Feyzioğlu's comments on people living in container houses and stated that 92 families have moved to new houses that the Social Assistance and Solidarity Foundation (SDYV) pays for. However, 44 families who continued to live in container houses refused to move even though the foundation suggested paying their rents.

At the end of Feyzioğlu's speech, Erdoğan said, the "[Council of State] President speaks for only 25 minutes, you have been speaking for more than an hour. You are misbehaving, this is enough."

Commenting on Feyzioğlu's criticisms over the government's "insufficient efforts" for the victims of the Van earthquake, Erdoğan said that Feyzioğlu's remarks were lies and left the hall after making his comments.

Feyzioğlu who is known to be among the short list of possible candidates of the main opposition Republican People's Party (CHP) for presidential elections, has a political agenda for the upcoming terms. Speaking to Daily Sabah, CHP Bursa Deputy Sena Kaleli spoke about Saturday's speech by Feyzioğlu. Kaleli stated that Feyzioğlu spoke about laws which have been broken in the country, and this was used to justify the speech, but it is understandable that his speech was regarded politically motivated to a certain extent. She noted that Feyzioğlu exceeded the time limit given to him and he could have been warned in that respect.

Accusing Erdoğan of not being open to criticism, Kaleli noted that Erdoğan revealed his true identity through his harsh reaction and he should not have lashed out with an immediate response. When asked about allegations that Feyzioğlu could be supported by the CHP for president, Kaleli responded that the CHP has not evaluated his candidacy in any party meeting yet. "It should not be found strange if he wants to be involved in politics. It is his democratic right, but there is no such issue on CHP's agenda right now," said Kaleli.
RELATED TOPICS