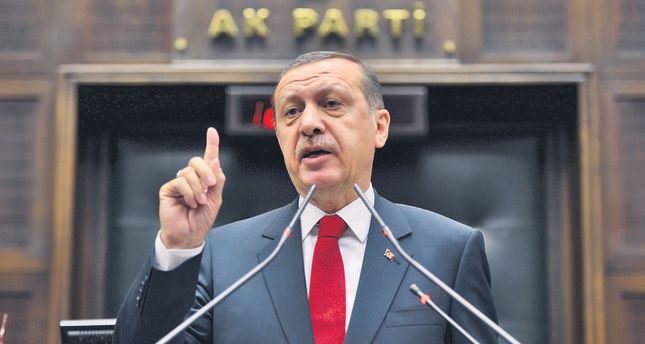 by Daily Sabah May 13, 2014 12:00 am
ISTANBUL — Prime Minister Recep Tayyip Erdoğan in his party's weekly group meeting in Parliament yesterday touched upon a number of important developments and events on the government's current agenda, including the economy, freedom of the press and reforms in the judiciary.

Responding to allegations that Turkey restricts press freedom and is increasingly becoming authoritarian, Erdoğan stated these claims were attempts to alter people's perception about Turkey through very defamatory propaganda and referred to the fact that the main national newspapers of the country systematically and freely publish provocative and insulting news about the government. "You cannot see such degrading headlines in any democratic country governed by the rule of law," Erdoğan stated, noting that there are numerous channels that intentionally scorn the government and consistently lie about current events in efforts to provoke people to take to the streets, while they claim there is no freedom of the press in Turkey.

The prime minister also referred to a report published by Freedom House, which put Turkey in the "Not free" category, from "partly free," listing Turkey in the same category as countries like China, Iran and North Korea, and implying Turkey had more freedom in the 1980s following the coup d'état. More importantly, Erdoğan called on critics to consider the fact that the Turkish Radio and Television Corporation (TRT) channel was removed from the cable channel list in Germany after it published news about the Hamburg riots, which is ironic considering the fact that the German president denied the charges when Erdoğan referred to the incident. "We are open to all sorts of criticism as long as it is not disrespectful," said Erdoğan, who stated that this was the sole reason why the Justice and Development Party (AK Party) government has consistently made reforms, based on the criticism they receive.

Noting May has been a relatively prosperous month in the past. Erdoğan stated the economy was continuously improving after the damage done by the Gezi Park incidents of 2013 and the Dec 17 operation, as it was breaking new records in a number of fields. For instance, exports have increased by 12.4 percent compared to the previous year and has reached the highest figures since the establishment of the Republic. Additionally, Erdoğan indicated the total number of Turkish citizens visiting foreign countries has significantly increased to 8 million from 2.5 million in 2003, which was a direct result of the government's initiatives to ease visa restrictions, improve transportation opportunities as well as the level of prosperity, allowing more people to travel around the world. On the other hand, Erdoğan referred to legal reforms to prevent crimes committed against children and stated penalties were increased.

Even though Erdoğan said he thinks such offenders who abuse children should face the death penalty, he stated corporal punishment in Turkey no longer existed, and therefore, they increased the amount of time such offenders were sentenced to prison. On the other hand, he explained that these reforms were only a part of the reform package to fight crime, preventive measures and for the effective and speedy conduct of the judicial system before the legislative term is over.
Last Update: May 14, 2014 1:10 am
RELATED TOPICS