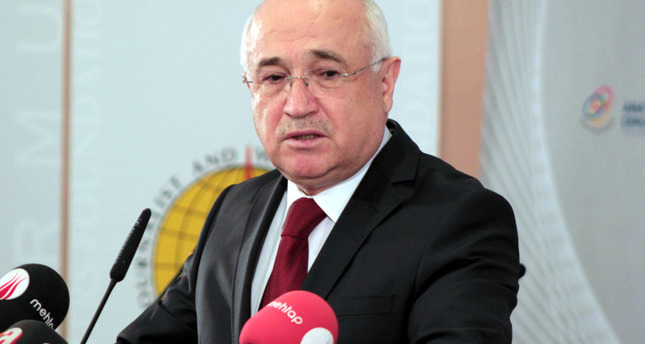 by Daily Sabah May 13, 2014 12:00 am
ANKARA — Following his official visit to Moldova and Romania, Turkish Parliamentary Speaker Cemil Çiçek evaluated the situation in southeastern Europe. Accompanied by his Moldavian counterpart Igor Korman, Çiçek visited Gagauz people who mostly live in Gagauzia in southern Moldova. Çiçek stated that Turkey attempts to help the Gagauz people protect their national identity, culture and language, and added that there is strategic cooperation between Moldova and Turkey.

Attending the Southeast European Cooperation Process Parliamentary Assembly (SEECP-PA), Çiçek delivered a speech highlighting the significance of the SEECP and offering to establish a permanent secretary to be completely financed and hosted by Turkey for the coming five years to follow the latest developments in Ukraine, Bosnia and Herzegovina, and Kosovo. Çiçek pointed out that the SEECP PA forms the parliamentary part of efforts to build a peaceful process in the region.

Çiçek stated that Turkey has headed up the SEECP PA twice and played an active role in the process. He further noted that the next meeting would be in Albania. Drawing on past challenges and suffering across the region, Çiçek said, "This region [southern Europe] needs peace, stability and welfare. Turkey is the key country in the region. Turkey aims to contribute to these meetings."