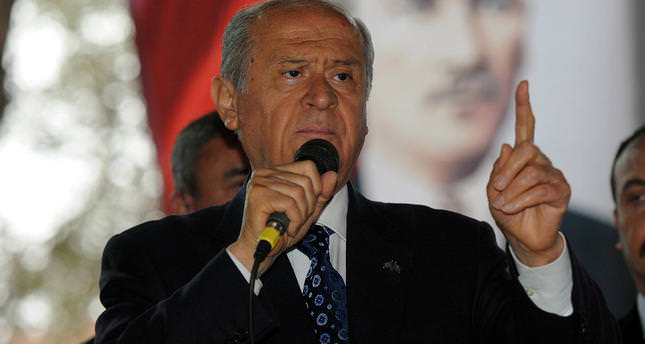 by Daily Sabah May 14, 2014 12:00 am
ISTANBUL — The Nationalist Movement Party (MHP) is still trying to agree on a candidate to support in the upcoming presidential elections after the party's chairman Devlet Bahceli's recent statements vowing that the party will choose a candidate who will surprise everyone.

Bahceli claimed that the candidate will be welcomed by every social group in Turkey but stressed that they will be closer to the nationalist side. The party has since discontinued field work for the 2015 general elections and redirected its efforts to the presidential election campaign. The MHP wants to parlay the polarization in society which has become apparent after the Gezi Park protests in June 2013, according to analysts. Although the MHP had said that they would not ally with any other opposition parties, the party is now exploring the possibility of such an alliance.

The MHP administration has started organizing meetings and conducting surveys to determine which qualities the public is seeking in a candidate. Among the qualities most commonly referenced were being nationalist, conservative, able to represent the whole Turkish society and willing to cover the needs of liberals.

MHP officials said that the candidate may be a party member or not. It was said that the MHP will seek alliance with other opposition parties apart from the pro-Kurdish Peace and Democracy Party. Sources close to the MHP said that the party may support veteran journalist Taha Akyol or former Republican People's Party (CHP) deputy İlhan Kesici.
RELATED TOPICS