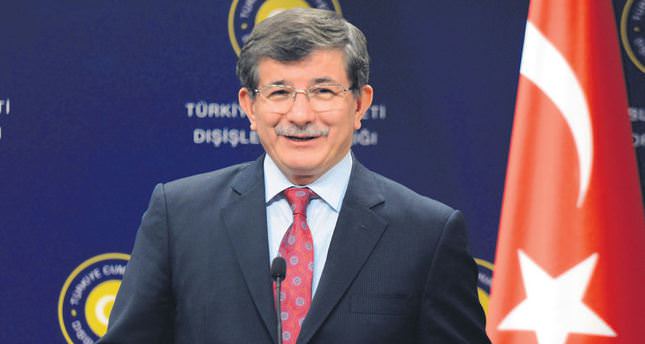 The European Court of Human Rights' decision is not conducive to a solution in Cyprus, says FM Davutoğlu, adding that Turkey would not pay a fine to an entity it doesn't recognize

ANKARA — The European Court of Human Rights (ECHR) ruled on Monday that Turkey must pay 90 million euros (TL 255 million) in compensation to the relatives of missing persons and Greek Cypriot residents of the Karpasia Peninsula for damages incurred in the Turkish intervention of the island in 1974. However, Turkish officials ignored the court order and stated that they have no intention of paying compensation. "The ECHR's ruling consists of some legal contradictions and therefore we don't see it at all as binding in terms of payment," Turkish Foreign Minister Ahmet Davutoğlu said yesterday. He further added that Turkey sees no obligation in paying compensation to a country that it does not formally recognize. "In terms of the grounds of this ruling, its method and the fact that it is considered a country that Turkey does not recognize as a counterparty, we see no necessity to make this payment."

Davutoğlu also criticized the ruling, saying it came at a bad time for talks aimed at reunifying the island. President of the Turkish Republic of Northern Cyprus Derviş Eroğlu shared similar thoughts, "The ECHR's compensation order is a political decision which lacks a legal basis and is incompatible with the principles of justice. Unfortunately, with this decision the ECHR has reversed the principles of justice and, moreover, ignored the real victims of the Cyprus disaster and punished innocent people," Eroğlu remarked.

Turkey's Minister for EU Affairs Mevlut Cavuşoğlu also stated that in terms of timing the ECHR decision will not benefit anyone. "The ECHR's decision is inappropriate from a legal perspective, from a political perspective and even for applicability," Cavuşoğlu added.
Devlet Bahceli, the leader of Turkey's opposition Nationalist Movement Party (MHP), also slammed the European court's decision. "In the name of the nation, I call on the prime minister to reject the ECHR ruling and send it back, and declare to all sides that we will closely follow this issue."

On the other hand, the Greek Cypriot Government welcomed the ECHR's ruling. Regarding the compensation awarded to relatives of missing persons, government spokesman Nicos Christodoulides stated that the Cypriot government is pleased with the fact that the court once more condemned the Turkish policy of violations and its attempts at altering the demographics of the occupied areas.

Furthermore, U.S. Vice President Joe Biden's scheduled visit to the island also raised hopes for peace. The Whitehouse said on Monday that Joe Biden will visit Cyprus next week to meet officials from both sides of the island. "The vice president will emphasize the United States' strong support for a comprehensive settlement to reunify the island as a bizonal, bicommunal federation with political equality," a statement from the Whitehouse read.

Additionally, Greek Cypriot media outlets reported that Biden will reportedly announce the financing of a master plan for the Famagusta area, including fenced-off Varosha to which access would be given to the experts drafting the master plan. There would also be the demining of three minefields. Greek Cypriot media outlets further claimed that both sides of the island reportedly agreed to the U.S. proposal although there are still some procedural details to sort out.

Some analysts suggest that while the international community including the U.N. and the U.S. put too much effort into solving the 40-year dispute, the ECHR's ruling may have significant negative consequences for the Cyprus peace process. In fact, the lawsuit is based on the ECHR's decision filed by Greek Cyprus back in 1994. The ECHR delivered a judgment in 2001 and found numerous violations of the convention by Turkey arising out of the 1974 Turkish intervention.

However, the Strasbourg court is insisting that "The defending state must within three months pay the claimant government 30 million euros, as well as any sum of tax due, as compensation for the suffering caused to the families of those who disappeared," as announced by Judge Josep Casadevall.

Yet, Rıza Turmen, a former judge of the ECHR and now an opposition lawmaker in Turkey's Parliament, disagreed with Davutoğlu saying Ankara would be legally required to comply with the ruling. "It's extremely clear from Article 46 of the European Convention on Human Rights, which says all signatories are committed to comply with final decisions."

On the other hand, Deputy Prime Minister Beşir Atalay remarked that the court's decision does not affect the Cyprus talks. "We have been carrying on intensive work on the Cyprus issue. This time the reconciliation talks are going in the right direction at a fast pace. Regarding this issue, the international community also has a constructive attitude so therefore I'm very optimistic this time," he said.
Last Update: May 14, 2014 9:37 am
RELATED TOPICS