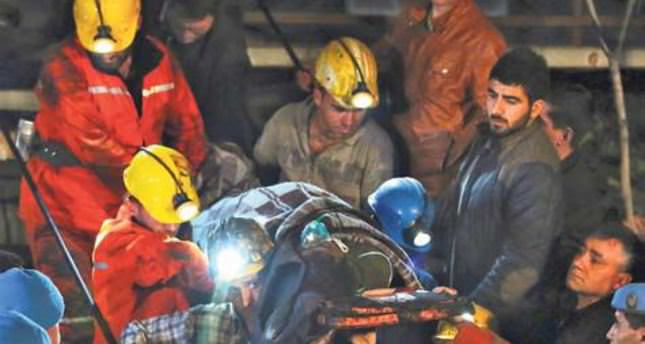 by Daily Sabah May 15, 2014 12:00 am
MANISA — Prime Minister Recep Tayyip Erdoğan, speaking after his visit to the Soma mine, offered his condolences to the families of the dead miners and said the state was ready to help them before thanking all those who were working around the clock to rescue those still trapped.

A fire at a coal mine in the town of Soma in Manisa on Tuesday left hundreds dead. Many politicians including Prime Minister Recep Tayyip Erdoğan and Chairman of the Republican People's Party (CHP) Kemal Kılıçdaroğlu commented on the tragedy, which is believed to be the worst mining disaster in Turkey's history. Erdoğan and Kılıçdaroğlu visited the town and expressed their condolences to the families of the victims. A number of foreign officials and ambassadors offered their condolences. The Turkish Grand National Assembly (TBMM) also issued a statement on the incident signed by the political parties. President Abdullah Gül offered his condolences to the families of the victims and ordered all means to be used in rescuing the miners still trapped underground.

The opposition harshly criticized the government, claiming that the investigation offer made by the CHP and supported by the Nationalist Movement Party (MHP) and the Peace and Democracy Party (BDP) three weeks ago for the mine in Soma was rejected in the Parliament. Opposition parties also claim that the company was negligent and did not enforce the required safety measures prior to the tragedy. Government officials said an investigation was launched and the allegations will be taken into consideration. Energy Minister Taner Yıldız assured transparency throughout the investigation. Three days of national mourning were declared and celebrations planned for May 19 to commemorate the Turkish War of Independence have been cancelled.
RELATED TOPICS