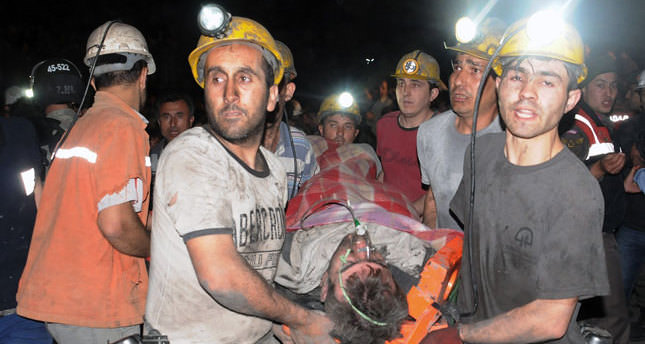 by Daily Sabah May 15, 2014 12:00 am
ISTANBUL — A joint statement about the coal mine tragedy in Soma signed by the group deputy chairmen of four political parties and speaker of Parliament Cemil Çiçek was issued by the General Assembly of the Turkish Grand National Assembly (TBMM).

The general assembly was led by Ayşe Nur Bahçekapılı, who requested a minute's silence for those killed in the coal mine tragedy. "It is impossible to express the degree of suffering with words," said Bahçekapılı, who sympathized with the victims and their families.

Expressing the assembly's condolences for the nation's loss, Bahçekapılı noted they were hoping to hear good news from those still trapped underground, adding that their hearts and prayers were with the victims and their families.

The motion read: "On Tuesday May 13, 2014, a significant number of our citizens lost their lives as a result of a coal mine fire that took place in the Soma district of Manisa.

On behalf of the Grand National Assembly, we would like to express our condolences to those who have been killed, wish patience for their loved ones and a speedy recovery for those who have been rescued. We wish for the successful rescue of our miners who have not yet been found. As the speaker of the TBMM, members of the executive board, group deputy chairmen, deputies and independent deputies, our suffering is immense and we hope such heartbreaking incidents do not occur again in the future."

The tragedy has resulted in the declaration of a three-day national mourning and the General Assembly did not convene yesterday, while the election of five members from the State Audit Court will take place on May 21 instead of today. The assembly is expected to reconvene on Tuesday, May 20.
RELATED TOPICS