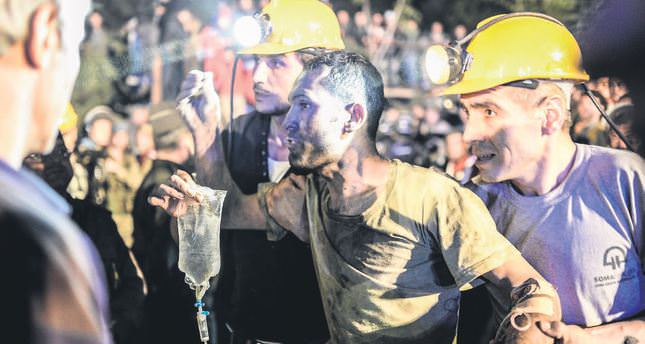 Turkey's worst mine disaster claims more than 282 lives in the Soma district of the western city of Manisa. Daily Sabah spoke to local officials in the town about Tuesday's tragedy

ISTANBUL — Turkey has been mourning coal miners who lost their lives in an explosion and subsequent fire at a coal mine in the Soma district of the western city of Manisa on Tuesday. As the Prime Ministry declared national mourning for three days on Wednesday, the death toll has risen to 282, and efforts to rescue trapped miners are continuing around the clock.

The tragedy struck when a transformer supplying power to the mine, which is operated by a private company, exploded and caused a blaze that trapped the miners who were kilometers beneath the surface. Arriving in Soma right after the explosion, Energy Minister Taner Yıldız stated that the accident was the worst work accident that Turkey has witnessed in its history.

Amid the grief and anger of the relatives and loved ones of those who perished in the accident, politicians, including President Abdullah Gül, Prime Minister Recep Tayyip Erdoğan, main opposition Republican People's Party (CHP) leader Kemal Kılıçdaroğlu and Nationalist Movement Party (MHP) leader Devlet Bahçeli, arrived in Soma to offer condolences and get detailed information concerning the rescue work. The U.S. government, the EU and embassies in Ankara offered their condolences, and a sincere step came from one of Turkey's sister countries, Pakistan, which declared a national day of mourning to share Turkey's grief.

Despite simmering anger and grief and allegations of negligence against the coal mine company, inspectors and government officials across the country, Turkey's political parties displayed unity over the tragic disaster and continuing rescue work both to save the trapped miners as soon as possible and to ensure common sense among the miners' relatives.

Daily Sabah spoke to the Soma District Municipality, local politicians in Soma and Manisa deputies regarding the latest developments in the coalmine disaster.

Musa Maman, deputy mayor of Soma, described the accident as the worst mine accident in the country's history and stated that the Soma municipality is coordinating aid for the families of miners, while Kırkağaç, a district close to Soma, is where the corpses of miners have been placed.

Maman said that aid is coming from across the country and has been delivered to the families, and psychologists from abroad and Turkey have arrived in Soma for the families and casualties who are going through a severe trauma. Pointing out that financial aid is pouring into the district, Maman said that bank accounts have been opened for money donated for families.

When asked about the allegations concerning the coal mine company, Maman stated that the company is one of the two biggest companies in Soma, and all required inspections regarding the coal mine were conducted. "This accident is completely unexpected because the company is not surreptitious or illicit. The company was one of the companies that locals trusted most," said Maman, strongly indicating that these are only his personal opinions regarding the issue.

Regarding the crisis management counter headed by Yıldız, Maman stated that the energy minister has been in Soma since the beginning of the tragic accident and that all of the officials and rescue teams have made every effort to rescue miners.

CHP Soma District President Murat Bayramoğlu stated that there is a tragedy of humanity in Soma now and that the CHP is evaluating the situation from the viewpoint of humanity, not politics. "We are trying to share the pain of the families of the miners. There are lots of issues that need to be discussed regarding the incident, such as inspections of mines, but today is not a suitable day to do politics."

When asked about allegations concerning the coal mine company, Bayramoğlu said that there are serious allegations regarding the company and that investigations into the allegations about the company, the entire mining system and trade unions will be launched when the time comes.

Slamming trade unions in Turkey, Bayramoğlu said, "Unfortunately, we [Turkey] have witnessed that with regard to mining, trade unions have completely failed; they did not carry out the correct policy that they should have. Unions are set up to prevent the capitalism in Turkey. I am pointing out that the unions absolutely did not perform their duties, and they need to self-criticize."

Bayramoğlu stated that the families had to wait too long to get information regarding the corpses and casualties, causing psychological trauma among the families. He further noted that the issue he mentioned is not criticism, but only an observation.

MHP Soma District President Vedat Erdem commented on the coalmine disaster to Daily Sabah. Highlighting that the crisis has been handled well so far, Erdem stated that the MHP Manisa metropolitan municipality and local MHP deputies set up a crisis center to transfer the corpses and provide aid to local people. Erdem stated that what is necessary has been done by the MHP municipality thanks to the continuous efforts of MHP Manisa Mayor Cengiz Ergün. "Hundreds of miners are trapped beneath the surface and waiting to be rescued, but hopes are unfortunately fading due to the gas in the mine. These miners are not only from local Soma people; there are dozens of miners coming from various cities in Turkey. This is an unprecedented grief that Turkey has never witnessed before. Nearly each family in Soma lost one of their relatives in the disaster," said Erdem.

Refuting allegations that the crisis has not been handled well, Erdem stated that officials and rescue teams did their best to reach the miners. "We constantly reach the corpses of miners in the coal mine; our hopes for those who remain trapped in the mine are unfortunately fading; they have a slight chance for survival," added Erdem.

CHP Manisa Deputy Hasan Ören stated that the rescue work has been continuing through the crisis desk headed by Yıldız and that the death toll appears to be over 300. As a member of the Parliamentary Energy Commission, Ören added that he talked about mining problems in Turkey four to five months ago and that his statement was a precursor to the incident. On allegations regarding the coalmine company, Ören stated that there is much disinformation and allegations, but the CHP will take action after the incident becomes clearer. "As the CHP, we decided to use common sense and not make political statements regarding the incident. We agree with Taner Yıldız on this issue, but after the prime minister arrived in Soma, he ruined all common sense and compromise," Ören noted.

AK Party Manisa Deputy Uğur Aydemir offered his condolences to the whole nation and the families of those who lost their lives. Aydemir stated that they are using all means of the state to reach the miners. Aydemir stated that administrative and judicial probes would continue.
Last Update: May 16, 2014 1:52 am
RELATED TOPICS