KRG's oil marketed to US and Israel via Turkey despite objections 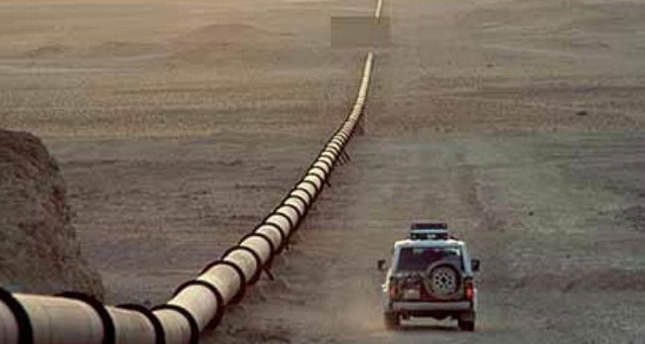 Kurdish oil pumped from Northern Iraq to Turkey since January will be sold to the U.S. and Israel despite Baghdad's claims that the sale is illegal according to the Iraqi constitution

LONDON — Israeli and U.S. oil refineries have joined the growing list of customers for crude from Kurdish Regional Government (KRG), a region locked in a bitter struggle with the central government in Baghdad that says the sales are illegal. The United States imported its first crude cargo from the region two weeks ago while at least four have gone to Israel since January, ship tracking and industry sources said, after two were shipped there last summer.

The Iraqi government has repeatedly said oil sales by-passing Baghdad are illegal and has threatened to sue any company involved in the trade, yet Kurdish crude and light condensate oil has been sold to several European buyers. Baghdad refuses to sell oil to Israel, echoing other Arab states. Israel's Energy Ministry declined to comment, saying that it does not discuss the country's sources of oil.

A senior Iraqi oil ministry official said Baghdad had no information on the sales but was investigating. "If these reports are correct, then dire consequences will be inevitable," the Iraqi oil official said. "This is a seriously dangerous development. We have always warned the region to stop smuggling Iraqi crude by trucks to Turkey...and now if this is proved true then they are going too far." An official KRG's Ministry of Natural Resources said from the region's capital Arbil: "The Kurdish Regional Government (KRG) has not sold crude directly or indirectly to such destinations."

The stakes are high as KRG's independent oil sales allow it to receive income outside Baghdad's budget, pushing it towards even greater autonomy. Tensions reached a new pitch this week after KRG's president said Iraq had been led in an authoritarian direction by Prime Minister Nuri al-Maliki and threatened to end the region's participation in the federal government.

The deals involve major international commodity traders, including Trafigura, one of the top three oil traders in the world, trading and shipping sources said. A spokeswoman for Trafigura declined to comment. The sales come as the KRG and Baghdad aim to complete long-running negotiations over a pipeline Arbil built to Turkey to circumvent the central government monopoly.

Arbil began pumping crude through to the Turkish port of Ceyhan on the Mediterranean in January but stopped short of selling it, under the threat of budget cuts from Baghdad. Storage tanks are now nearly full with 2.4 million barrels, trading and shipping sources close to the matter said. Exports of this oil could start as early as later this month. KRG began selling its oil independently of the federal government in 2012 with a small trickle of condensate trucked through Turkey, followed by two types of crude oil. Baghdad says only its state oil company is authorised to sell Iraqi crude, but both sides claim the constitution is on their side and with a crucial hydrocarbon law stuck in draft mode, there is room to manoeuvre.

A Turkish company called Powertrans is the broker for the Kurdish government, selling the oil via tenders to traders. Much of the crude has gone to Trieste, Italy while the condensate has gone to France, Germany, the Netherlands and even Latin America. The tanker Marinoula discharged around 265,000 barrels of heavy sour Iraqi Shaikan crude oil at the Oiltanking terminal in Houston on May 1, shipping sources said and Reuters AIS Live ship tracking showed.

The identity of the buyer was unclear as the terminal is connected to 23 refining, production and storage facilities scattered between the Gulf Coast and Cushing, Oklahoma. The crude was loaded by trading company Petraco at the Delta Rubis terminal at Dortyol in Turkey, one of two ports that export Kurdish oil, the sources said. The company declined to comment.

At least four cargoes laden with Kurdish crude went to Israel since the start of this year. Trading sources said that Israel's Oil Refineries Limited's (ORL) plant at Haifa ran some of it. Paz Oil Company, owner of a refinery near Ashdod, bought at least two cargoes within the last 9 months, traders said. A spokesman for ORL said "ORL purchases its crude oil from different sources in accordance with the refinery's needs and market conditions." A spokeswoman for Paz denied the plant had used Kurdish crude.

Some Kurdish oil has also been simply stored, sources said. Geneva-based trading company Mocoh lifted Shaikan crude from Dortyol in Turkey on the Baltic Commodore, which arrived in Ashkelon in Israel on Jan. 31, market sources and ship-tracking showed. An official at the company said that "Israeli refineries are not necessarily using this crude," but declined to elaborate. Trafigura sent a cargo of Kurdish crude to Israel on the Hope A tanker, which went first to Ashkelon and then to Haifa between Feb 10-15.

The Kriti Jade loaded Kurdish crude in Turkey and then sailed to Ashkelon on March 3 and then Haifa a few days later, the sources and ship-tracking showed. The second tanker, Kriti Sea, picked up Kurdish oil around March 5. The vessel then anchored off Limassol, Cyprus but did not discharge crude. Petraco lifted both cargoes. Instead it left still laden and tracking was switched off between May 17-20 near the Israeli coast. When it reappeared, still close to Israel, the tanker was empty.