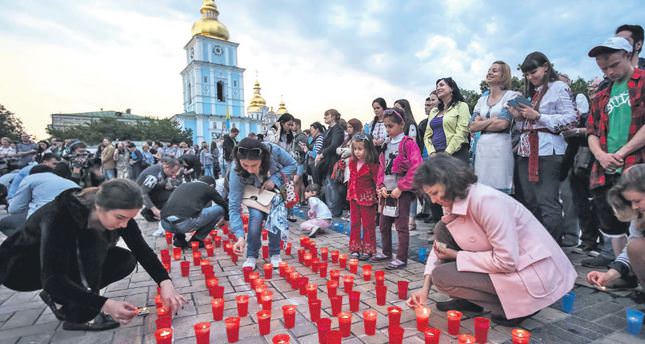 According to the head office of the Crimean Tatars' Cultural and Fraternal Association based in Ankara, Crimean Tatars have been under serious pressure from the Russian government not to allow them to commemorate the annual meeting of the forcible deportation of May 18, 1944, which resulted in a large number of deaths from starvation and disease. "After the 70th anniversary of one of the most agonizing deportations of Crimean Tatars from their homeland in history, an annual meeting will be held in Tandoğan Square to raise our voices against the ongoing injustice towards Crimean Tatars," announced the association with regard to the future of Crimean Tatars under Moscow rule.

Following the unification of Crimea with Russia, many Crimean Tatar people have been facing insecurity due to the possible return of Stalinist repression despite official promises to respect their rights and freedoms.

It was Joseph Stalin who accused the Tatars of sympathizing with Nazi Germany, ordering their mass deportation from the Crimean peninsula as a collective punishment. It is estimated that many of the 200,000 deportees died on their way into exile in Central Asia and eastern Russia.

Until the 1990s, many Crimean Tatar people were not allowed to return to their homeland under Soviet rule. Now that the peninsula is again under Russian control, there has been an increasing distrust of government authorities. Many have already fled the peninsula out of fear of political persecution.

Ukrainian Ambassador Sergiy Korsunsky in Ankara told the Anadolu Agency: "Many families are split now. Men stayed in Crimea and sent their mothers, wives and children to Ukraine because they have to guard their homes and properties."

According to statements from U.N. High Commissioner for Human Rights Navi Pillay on May 16, based upon a new U.N. report produced by her 34-strong monitoring team in Ukraine, the recent situation in Crimea shows that the legislation of the Russian Federation is incompatible with U.N. General Assembly resolution 68/262 and Ukrainian laws and has deteriorated the democratic rights and freedoms of Crimean Tatars.

The report highlights the various problems faced by the Crimean Tatar people. These include restrictions on Crimean Tatar media, fears of religious persecution of those who are Muslim and possible physical harassment. In addition to these potential problems, the leader of the Crimean Tatar Turks, Abdulcemil Kırımoğlu, was denied entry to his homeland with the lack of freedom of movement extending to other Tatar leaders trying to get back to Crimea.

The threat against the Parliament of the Crimean Tatars People has been terminated. The report also noted that "more than 7,200 people from Crimea - mostly Crimean Tartars - have become internally displaced in other areas of Ukraine" due to numerous difficulties arising from less than two months of Moscow rule since the Crimea referendum.

Apart from the vociferous response of the international community to the Crimea referendum stating the illegality of this referendum contravened the international law of territorial integrity, the Tatars, 12 percent of Crimea's largely ethnic Russian population of about 2 million, have been highly critical of Moscow's annexation of the peninsula previously governed by Ukraine. Many have noted that Crimean Tatars were against the result of the referendum when local authorities announced that 97 percent of those who voted preferred to join Russia.

Sunday's anniversary of the deportations in cattle wagons, which began on May 18, 1944, may only be a reflection of the troubles facing Crimean Tatars today. Whether the Russian government would respect their rights and freedoms is seen as a controversial issue. The Ukraine presidential elections will take place on 25 May, and the Crimean Tatars would be expected to cast their votes in the Kherson province of southern Ukraine to determine the future of Ukraine.
Last Update: May 19, 2014 1:54 am
RELATED TOPICS