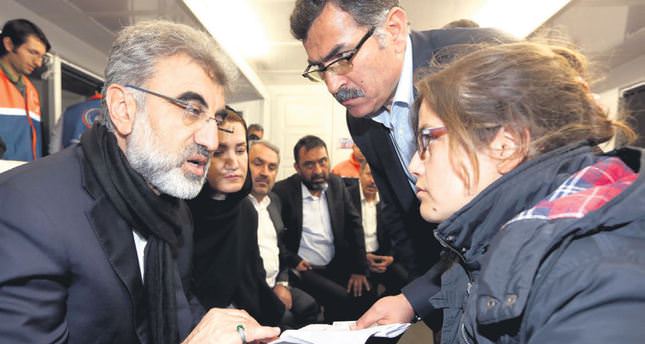 Six days after Turkey's worst mine accident, Energy Minister Taner Yıldız was praised for his response to the accident as Labor Minister Faruk Çelik was panned by criticism

ISTANBUL — Tuesday's coal mine disaster in the Soma district of the western Turkish city of Manisa has claimed 301 lives. The accident is now being described as the worst mine disaster in the country's history but Turkish Energy Minister Taner Yıldız has been praised for his continuous efforts both to rescue the miners and support the families and loved ones of the miners in Soma.

Amid the grief and anger directed at officials and the owner of the Soma coal mine, Yıldız's crisis management skills and empathy have been on display.

Since the beginning of the disaster, Yıldız has issued hourly press releases providing the latest information in terms of death tolls and the course of the rescue work in Soma, in an effort to prevent speculation on social media. When journalists asked whether he would resign over the disaster, Yıldız stated that his post had no significance compared to the laborers' lives.

One of the miners, İdris Tanrıverdi said, "After the disaster, the minister arrived here immediately and we obtained the correct information. He [Taner Yıldız] slept less and coordinated the rescue team."

"Feeling that the Turkish state is here with us heals our pains to a certain extent," said miner İbrahim Çapa. Retired miner Hüseyin Kaya stated that it is important that one of the government officials was in Soma with the miners and the government knows under which circumstances miners work.

While Yıldız's crisis management and common sense was praised by many Soma locals and authorities, Minister of Labor and Social Security Faruk Çelik was harshly criticized since he did not immediately arrive to Soma to coordinate rescue work and inspections regarding the disaster.

In the first days of the incident, he stated that he could not go to Soma because of his medical issues. It was alleged that he had cancer, but Çelik later announced that the suspicion of cancer was cleared following a medical screening.