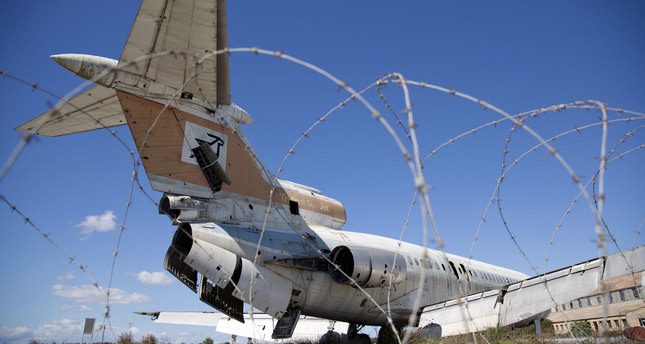 by Daily Sabah May 19, 2014 12:00 am
ANKARA — Foreign Minister Ahmet Davutoğlu in a recent press meeting following an inter-committee working lunch with Derviş Eroğlu, the president of the Turkish Republic of Northern Cyprus (KKTC), made crucial statements about the future of resolving the dispute on Cyprus, which divided the island between the Turkish and Greek population in 1974. Highlighting the urgent necessity for creating a permanent and lasting solution for the conflict, Davutoğlu indicated it was crucial to speed up the negotiation process and increase the frequency of bilateral meetings held between the two sides.

Referring to three positive developments, including increasing international attention about the issue and finding common ground that officially initiated the negotiation process, Davutoğlu noted that U.S. Vice President Joe Biden would hold equal meetings with both sides, a clear indication of increasing international attention about resolving the Cyprus dispute. Davutoğlu said Biden's visit was a remarkable and positive step, which could potentially set a precedent for other members of the international community in terms of encouraging the negotiation process and bilateral talks, creating great momentum towards reaching a resolution. "It is time to end the half-a-century-old conflict," said Davutoğlu, emphasizing the idea that Turkey would utilize all means to support a permanent resolution on the island and touching upon the fact that the Turkish side is unified both in terms of the negotiators and political representatives for a resolution and that they expect such cooperation from Greek Cypriots.

Noting they would have preferred to hold the negotiations directly through the leaders and more frequently, Davutoğlu stated the two sides have still progressed significantly, which was evident by the fact that a Turkish Cypriot official has visited Athens and that the Greek Cypriot chief negotiator has visited Turkey for the first time. "Everyone should be aware that this crisis did not occur yesterday; it has been almost half a century," said Davutoğlu, adding that it is not possible to resolve the crisis by delaying it and that the only way to resolve it was to adopt a rational attitude aimed towards immediate resolution. Davutoğlu also stated that Turkey would stand beside the KKTC and that the Turkish Cypriots have long endured years of hardship. Commenting on the European Court of Human Rights ruling that said Turkey must pay 90 million euros (TL 258.6 million) indemnity due to the 1974 operation when the Turkish Armed Forces proceeded to take over the northern portion of the island to protect the Turkish Cypriots, Davutoğlu said they respect the decision, but they do not recognize it as Turkey does not recognize Cyprus and the timing was problematic, as it had started 20 years ago and such a decision is most likely to negatively affect the negotiation process.

KKTC President Eroğlu also expressed his satisfaction about the increasing international attention and stated they were ready to reach a resolution were the Greek Cypriots ready to sign it.
Last Update: May 19, 2014 1:52 am
RELATED TOPICS