We feel the pain of Soma, says President Gül 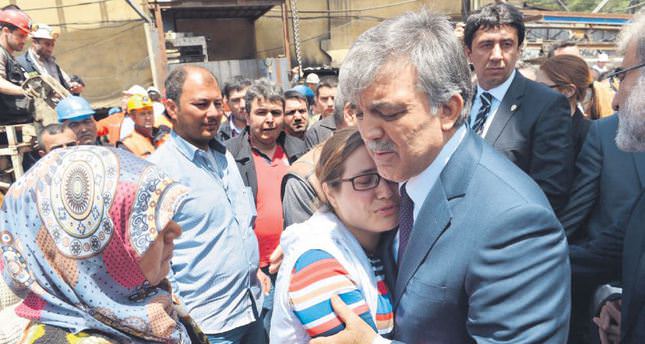 by Daily Sabah May 20, 2014 12:00 am
ISTANBUL — President Abdullah Gül issued a message on the occasion of Atatürk, Youth and Sports Day, expressing that the country was honoring the holiday but devastated by the Soma mining tragedy that occurred on May 13 and killed 301 mineworkers. "While we are pleased to welcome the May 19 Atatürk, Youth and Sports Day, we also feel the pain of the Soma tragedy in our hearts," said Gül, who also expressed his condolences once again and said he shared in the suffering of the families who lost loved ones in the incident.
Touching on the significance of the day, Gül stated that Atatürk's landing in Samsun on May 19 was a move that mobilized hope against the dire conditions Turkey faced at the time, and which enabled people to take action based on their belief in liberation. It was a historical step for Turkey and the nation to fight for independence and establish the Republic of Turkey. "If we can talk about Turkey as a strong, developed and rising country, we owe it to the determined and rational steps taken by our forefathers," Gül said, remarking that Turkey has significantly advanced in terms of modernization, the economy and democratization, assisted by the progress achieved in the past 10 years.

Gül noted that Turkey's current goal is to continue progressing toward a more democratic, politically and economically well-developed and prosperous state. Such developments will enable Turkey to surpass the level of contemporary civilizations, he added. "Without a doubt our beloved youth will have the most responsibility and strength in bringing Turkey beyond world standards," he said, emphasizing that it is essential to take advantage of Turkey's growing young population and ensure the youth are brought up in the most qualified manner through policies and programs geared specifically toward them. "This is the reason why we highly value the education of our youth." He went on to note that Turkey desires more economic, societal and political participation of the youth and aims to ensure that they have strong ideals, skills for independent thought, loyalty to national and ethical values and the ability to develop innovative technology.

The state aims to address the problems shared by the youth, meet their expectations and consider their needs, understand them and value their opinions, he added. Speaker of the Turkish Grand National Assembly (TBMM) Cemil Çiçek and Prime Minister Recep Tayyip Erdoğan also published messages explaining the meaning of May 19 for the Turkish nation. "Our joy [to commemorate the holiday] this year is mixed with our sorrow as the deaths of our brothers in Soma has pierced our hearts and burst our nation into tears," said Çiçek, who expressed that he believes the nation and the state will learn a lesson from the tragic incident. The prime minister also stated that May 19 symbolizes the start of the independent struggle of the Turkish nation and continues to be an inspiration to all Turkish people today. "I have no doubt that Turkey will celebrate its 100th anniversary as a country which has successfully fulfilled most of its dreams and goals," said Erdoğan, adding that the youth will have significant duties and responsibilities and they are Turkey's most precious fortune.
Last Update: May 20, 2014 2:10 am
RELATED TOPICS