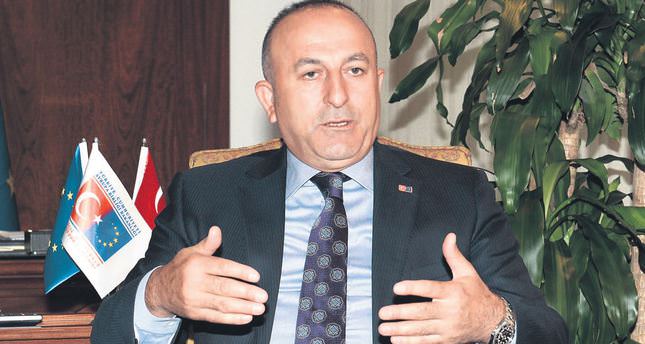 by Nurbanu Kızıl May 21, 2014 12:00 am
ISTANBUL — Prime Minister Recep Tayyip Erdoğan's planned presidential electoral campaign on May 24 in Cologne, Germany to reach over 2 million potential Turkish voters is facing criticism from numerous German politicians who called on Erdoğan to cancel his campaign. The German government has expressed a clear stance that it will host Erdoğan with pleasure, despite numerous calls to cancel his meeting over what some view as an intervention in democratic rights.

Some German politicians from various parties including the Social Democrats, the Christian Democratic Union of Germany, and the Green Party accuse Erdoğan of pursuing his presidential election campaign despite the recent mining tragedy in Soma which killed 301 coal mine workers. They have demanded that he cancel his campaign rally in Cologne.

In a recent interview with the Westdeutsche Allgemeine Zeitung, Guntram Schneider, who is the minister of integration of North Rhine-Westphalia for the Social Democrat Party (SPD) demanded that Erdoğan cancel his campaign meeting as it almost exploits Germany's hospitality.

Aydan Özoğuz, the SPD's federal minister of integration, spoke to the Frankfurter Allgemeine Zeitung newspaper and criticized the way protestors were handled in Soma and claimed that the security forces' behavior was "shocking and unacceptable," while Dietar Nietan who is a foreign politics expert from the SDP also told the Frankfurter Allgemeine Zeitung that the Grand Coalition in Germany should revise the strategy it applies to the Turkish government and criticized Erdoğan's attitude following the Soma tragedy.

On the other hand, Andreas Scheuer, the secretary-general of the Social Union Party also reacted negatively to Erdoğan's visit and stated that Erdoğan cannot carry out his presidential campaign rally in Germany.

Julia Klöckner, the vice president of the Christian Democratic Union, said in an interview with Die Welt newspaper that she hopes Turks living in Cologne do not attend the campaign rally and demonstrate that they do not support or approve of Erdoğan's ideologies. Similarly, Cem Özdemir, the co-president of the Green Party, noted in a recent statement that Erdoğan's stance regarding the Soma tragedy received criticism and therefore he cannot carry out his presidential campaign in Cologne.

A number of German news outlets also criticized Erdoğan's visit, underlining its significance for his presidential bid, in which he is the strongest candidate but still needs about 5 percent more votes than his party received in the recent local elections held on March 30. "This is why Erdoğan needs the votes of 2.6 million Turkish electorates living abroad," an article in Kölner- Stadt-Anzeigner stated, explaining that it will be the first time Turkish citizens living abroad will be able to participate in the elections.

On the other hand, Frankfurter Allgemeine Zeitung claimed it is highly likely that Erdoğan will use reprisals for Germany's President Gauck's remarks when he criticized the Turkish government during a recent visit and claimed that Gauck was genuinely concerned about the state of democracy in Turkey under the AK Party government, while Erdoğan's criticism will target the neo-Nazi NSU homicides which they stated was only a tool for Erdoğan to mobilize his Turkish nationalist project, not considering the fact that those who have been killed by neo-Nazis were of Turkish descent and the Turkish population here constantly faces verbal and physical attacks by such racist groups.

The Saarbrücker Zeitung newspaper on the other hand claimed that Erdoğan will exploit his rights during his speech as a guest and allegedly harm Turkish people living in Germany. The newspaper also harshly claimed that the European Union will come to the conclusion that Turkey will never become a member of the EU, while the Mannheimer Morgen newspaper compared Erdoğan to a hateful preacher and a fanatic, but failed to provide sufficient information to back up their claims.

Additionally, Turkey's EU Minister Mevlüt Çavuşoğlu confirmed that Erdoğan's visit will not be called off despite what he termed rhetorical and populist criticisms. He added that only the German Government's statements were binding for Turkey. EU Ambassador to Turkey Stefano Manservisi also reassured that the two country's relations were constantly improving when he said, "I am personally motivated to build on what has already been done between Turkey and the EU. We call it accession, but we also call it friendship and strong partnership."

In an interview with Daily Sabah, Yasin Aktay, the AK Party's director of foreign affairs, said Erdoğan's campaign meeting in Germany is his democratic right and the calls for him to cancel the meeting indicate deficiencies in the understanding of democracy in Germany. "If they were to conduct a survey among the Turkish people living in Germany, they would come to the conclusion that a majority of them want Erdoğan to carry out his campaign meeting here," said Aktay, adding that the German media was trying to create the impression that Erdoğan is an "unwanted" leader based on the claims of a small minority who oppose him in Turkey and in Germany. "There is a sense of Erdoğan-phobia, not considering the fact that freedom to travel, speak and convene are basic rights which everyone is entitled to," Aktay remarked, who noted that German actors are trying to put restrictions on freedom of expression and make it sound ordinary, a clear indication of increasing fascism in Germany.

Aktay also noted that Erdoğan's meeting was a result of an invitation by the Union of European Turkish Democrats, one of the largest and most active Turkish organizations in Europe and therefore, putting restrictions on Erdoğan's speech would directly violate this organization's freedom of expression and would be a disgrace for democracy.
Last Update: May 21, 2014 1:40 am
RELATED TOPICS