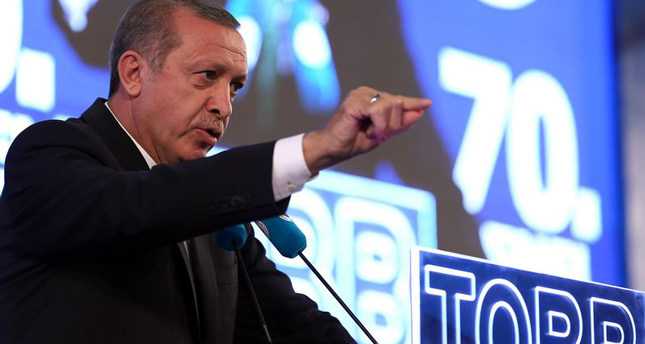 by Daily Sabah May 22, 2014 12:00 am
ANKARA — At 70th Fiscal Plenary Session of the Turkish Union of Chambers and Exchange Commodities (TOBB), Prime Minister Recep Tayyip Erdoğan delivered an important speech encompassing a number of issues including the amendments to the Constitution and the Soma tragedy.

Among those who attended the function were Kemal Kılıçdaroğlu, leader of Turkey's main opposition Republican People's Party (CHP), and representatives from other opposition parties. Erdoğan explained that the AK Party has a total of 326 deputies in the Grand National Assembly (TBMM) and they assigned three members to the Constitutional Negotiation Commission while the other three parties have a total of 220 deputies and assigned nine members to the commission. A total of 60 items have been addressed, according to Erdoğan, who stated that the AK Party was ready to address and resolve all of the items but the request was refused by the commission's chair on the grounds that all four parties need to participate.

"Why do we have to wait for the Nationalist Movement Party (MHP) and the People's Democratic Party (HDP) to proceed with the matter?" Erdoğan asked, explaining that the AK Party and the CHP had the prerogative to work on the items. He also noted that there was conciliation of about 60 items and the AK Party is all set to resolve them and called for people to stop exploiting emotions by claiming that they are unable to do so.

On the other hand, Erdoğan expressed his condolences once again to the victims of the Soma mining tragedy and thanked everyone who contributed to the rescue and relief efforts, and to everyone who contributed through their prayers and donations. Touching upon the fact that there have been provocateurs trying to take advantage of people's pain to seek political gains from the incident, Erdoğan stated they caused serious harm to the nation as they disregarded the pain and tried to provoke people.

Erdoğan also stated that the government will follow the incident and promised not to leave out any details of the investigation. Additionally, Erdoğan said the government's next goal was to mend the wounds of the families and loved ones of those who died in the incident. He confirmed that the government will utilize all means to ensure that the victims' families are well taken care of and treated as precious heritage of the martyrs of Soma. Highlighting the importance of occupational health and safety, Erdoğan said taking precautionary measures could be costly but the lack of such measures is even costlier as it may unfortunately result in loss of lives.