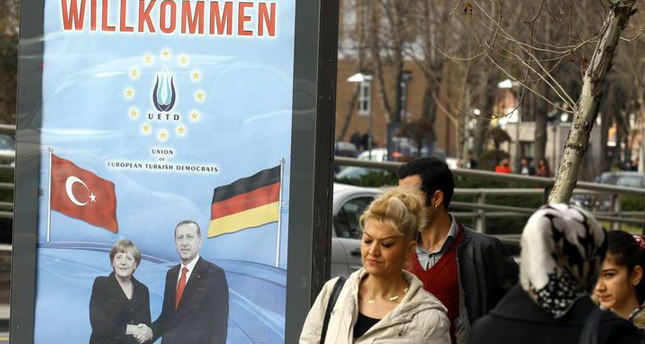 by AA May 22, 2014 12:00 am
BERLIN — German Chancellor Angela Merkel has said she believes Turkish Prime Minister Recep Tayyip Erdoğan will act with "a sense of responsibility and sensitivity" during his upcoming official visit to the German city of Cologne on Saturday.

Merkel was speaking during an interview for the German daily Passau Neue Presse published on Thursday.

The German leader was referring to a planned rally which Erdoğan will address on Saturday in Cologne and protests which will be held against him at the same time.

The scheduled visit has sparked debate among rival groups and politicians in Germany, with some calling for the trip to be cancelled over fears it could lead to new divisions and tensions among immigrants in Germany.

At least 30,000 Turkish immigrants will welcome Erdoğan, according to Süleyman Çelik, leader of the Union of European Turkish Democrats - one of the most influential organizations of Turkish immigrants in Germany, which organized Saturday's rally.

Erdoğan has previously addressed thousands of Turkish immigrants in major rallies organized in Cologne in 2008, in Dusseldorf in 2011 and in Berlin three months ago.

At the events, he accused Germany of deploying discriminatory policies against Turkish immigrants. He also called on Turks to learn German and integrate into German society but also to preserve their own language and culture.

Several NGOs and political groups have registered to hold counter-demonstrations in Cologne on Saturday.

The European Federation of Alevi Communities, which has been critical of the Erdoğan government's policies, announced a mass rally in Cologne's Ebertplatz, three kilometers from the Lanxess Arena congress center, where Erdoğan will hold his rally.

The anti-immigrant PRO NRW party also announced a protest to take place at Deutz Train Station, about 800 meters away from the Lanxess Arena.

Erdoğan's visit on Saturday comes a day before Germany and 20 other EU member states will vote in the European Parliament elections. The results of the elections from all EU countries are due to be announced late Sunday.