Laws will ensure Soma tragedy will not be repeated, says PM 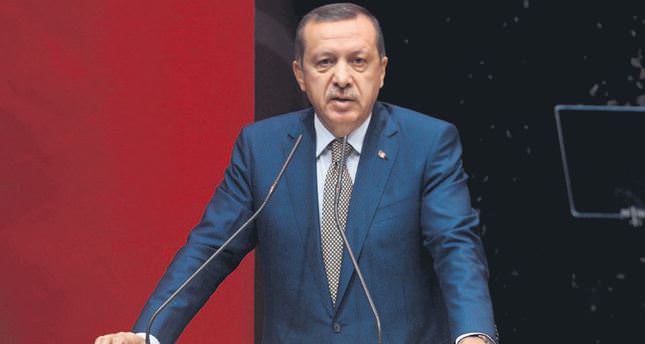 by Daily Sabah May 24, 2014 12:00 am
ISTANBUL — Prime Minister Recep Tayyip Erdoğan yesterday at a party meeting organized at the Justice and Development Party (AK Party) headquarters in Ankara commented about the current state of events in the country and touched upon the latest developments pertaining to the Soma tragedy, resulting in the death of 301 coal mine workers. Starting off his speech by expressing his condolences to the victims' families and loved ones, Erdoğan explained the process following the incident.

Accordingly, he stated the government has mobilized every means possible to respond to the crisis and noted a total of 2,743 staff participated in the rescue and support activities and noted the Ministry of Energy and Natural Resources, the Ministry Labor and Social Security, the Interior Ministry, the Ministry of Health, the Ministry of Family and Social Policies, the Ministry of Education and the Ministry of Youth and Sports have all participated and continue to take part in the ongoing efforts to heal the wounds of the survivors as well as the families and loved ones of the victims. On the other hand, Erdoğan noted serious and comprehensive steps will be taken to change rules and regulations in the Mining Law and the Occupational Health and Security Law and referred to 10 mine workers who visited Ankara to discuss the measures that need to be taken following the tragedy, as well as listening to the concerns and suggestions of the workers. "We have started taking action at all levels to minimize the potential of future accidents," said Erdoğan, who indicated they are closely following all administrative and legal investigations.

He also noted that the AK Party proposed the establishment of a parliamentary investigatory commission with the support of all parties and thanked all parties for their support. Erdoğan said, "77 million people are united in one cause," noting that the tragedy brought the nation together and that everyone felt the pain of victims and their families, as people from 81 provinces mobilized to provide assistance and also touched upon the fact that other countries have also shared in Turkey's pain.

Criticizing those claiming the catastrophe hit Soma because a majority of them voted for the AK Party in the recent local elections, Erdoğan condemned these statements and indicated their claims were irrational and absurd. On the other hand, Erdoğan also criticized those who attempted to provoke citizens during the tragedy instead of trying to heal the victims' wounds and vandalized public property and attacked the police. Also referring to the recent clashes that occurred in Okmeydanı where protestors threw Molotov bombs at police cars, Erdoğan said the police cannot afford to be mere spectators towards those who violently attack and terrorize public property. Erdoğan also stated he will not take into consideration those who tell him to cancel his visit to Cologne, Germany, and will proceed with his visit as he has over 3 million citizens there that he wants to address.
Last Update: May 24, 2014 1:54 am
RELATED TOPICS