Turkey hopes for a Biden-boost to Cyprus talks 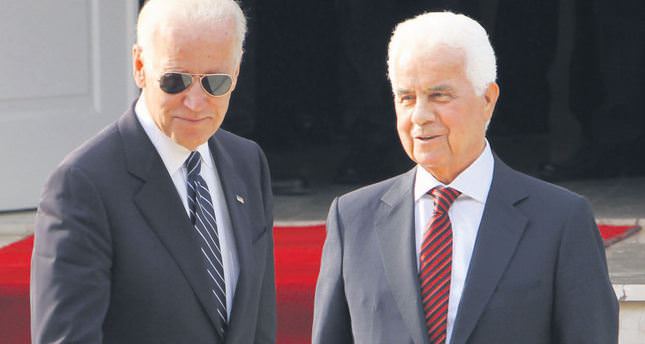 by Daily Sabah May 24, 2014 12:00 am
ISTNABUL — Turkish Foreign Minister Ahmet Davutoğlu said on Friday that "the U.S. Vice President Biden's visit to the Turkish Republic of Northern Cyprus is a historic step in itself as it shows equal treatment to both sides and gives a positive message. We hope that negotiations will gain momentum in the coming days." The island has remained divided since Turkey intervened to abort a Greek inspired coup in 1974 and talks since then have failed to produce a unity deal. Derviş Eroğlu, president of the Turkish Republic of Northern Cyprus (KKTC), has hailed Joe Biden's visit as a success and called for negotiations to speed up. Expressing the fact that they shared the same views on many issues with Biden, Eroğlu stated it is crucial to focus on conflict resolution rather than security measures on the island.

"Today we realized Biden did not have very different ideas than ours" said Eroğlu, who went on to note that increasing the frequency of negotiations was necessary for reaching a comprehensive permanent resolution.

According to the agreement reached on Thursday evening, Eroğlu explained the leaders would meet twice a month and work on confidence building measures as they have previously pledged to do so and stated Turkish Cypriots have a suggestive confidence-building package which they will present at the negotiation table. "We must turn this opportunity into an agreement, a resolution" said Eroğlu. "If negotiations lag until 2015 it may not be possible to find the current favorable conditions. "Our main goal is to reach a comprehensive resolution, which would enable us to join the EU and have a better international reputation."

Eroğlu said Biden's visit has been extremely positive one and had increased hopes about resolving the dispute in Cyprus. On the other hand, Eroğlu made it clear to Biden that it is "better to be on the safe side and take precautions on some issues as new advancements will likely take some time despite the fact that it has been four years since the start of the negotiation talks."

Additionally, Joseph Biden in his press statement said, "The United States recognizes only one legitimate government of the Republic of Cyprus" and stated his position about this would not change after the meetings. He stated it was crucial to find a resolution to the conflict in Cyprus which was long overdue. "Peace is always possible but it requires engagement, not just from leaders but from citizens" said Biden. He also referred to Cyprus' growing role in regional energy security directly intertwined with its stronger leadership in the Eastern Mediterranean, which is said to be one of the main reasons why the U.S. has more interest than ever to resolve the 40-year-old dispute
on the island.
Last Update: May 24, 2014 1:47 am
RELATED TOPICS