Europe should come to terms with new Turkey, says Erdoğan 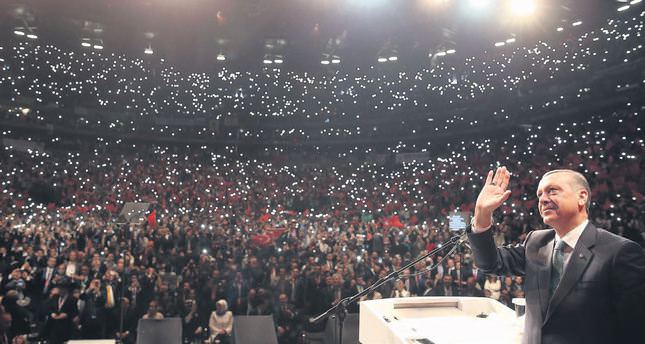 Addressing thousands of Turkish citizens in Cologne, Erdoğan conveys his appreciation for their support and tells Europe it is time to recognize growing Turkey as an equal

COLOGNE — Prime Minister Recep Tayyip Erdoğan held a rally on Saturday in the German city of Cologne amid concerns of security and certain groups' protests. German media outlets have carried out black propaganda during and after Erdoğan's Saturday visit to Germany.
Ahead of Erdoğan's visit, certain politicians and German media called for the trip to be cancelled over fears it could lead to new divisions and tensions among immigrants in Germany.

Eight groups, including the Federation of Alevi Communities in Germany (AABF), and extremist right wing parties - PRO North Rhine-Westphalia (NRW) and PRO KÖLN - protested Erdoğan during his rally. Despite all the protests and the smear campaign, Erdoğan's rally arena was filled beyond capacity by Turkish citizens living in Cologne. Speaking to the crowd, Erdoğan said Europe should accept the economically growing and diplomatically active Turkey as an equal and realize they faced a new emerging power.

According to officials, the arena was filled with 18,000 people, while the total number of supporters was around 40,000, including those who waited outside for Erdoğan.

Addressing Turks in Germany, Erdoğan said: "We have been missing you for the years you have been missing us away from your motherland. I pay you my gratitude on behalf of my nation for your labor, patience and wisdom. We are proud of you as a nation." Erdoğan gave a message to Europe in his speech. He said, "Now there is a new Turkey, not the one you may know from before. The EU should face and embrace the new Turkey."

He stated that with its large economy and active foreign policy, Turkey will shape the 21st century, and everyone has to face this reality.He continued: "No one, no country, no international community can shake their finger at Turkey, none can dictate to us in arrogance what to do. No one can scold. Who feels that he has the right to do for himself, cannot withhold that right from Turkey."

The prime minister stated that boosting the economy, democracy and freedom and having the right to have a word in global and regional issues are the rights of Turkey, and those who are against the rights of Turkey have to accept the new Turkey with its growing power in international platforms.

Erdoğan said he was grateful for the condolences of expatriates for the victims of the Soma coalmine disaster in western Turkey on May 13, in which 301 workers were killed. He accused what he called "illegal" groups, including opposition lawmakers, of "trying to gain political mileage" from the disaster. Touching on the Soma mine disaster, which is accepted as the worst mine disaster in Turkey, claiming the lives of 301 miners, Erdoğan stated that negligence in the disaster would be found out, and those who are responsible for the disaster would be held accountable.

Erdoğan also criticized militants who tried to provoke the country by using Molotov cocktails and grenades during recent clashes with police in the Okmeydanı district of Istanbul. Erdoğan said: "They [militants] clashed with police in Okmeydanı.

One citizen [Uğur Kurt] lost his life, and then one citizen [Ayhan Yılmaz] also lost his life. A woman, the sister of Kurt, yelled at militants, saying, "If you [militants] had not violently protested, my brother [Kurt] would not have died."

Criticizing those who accused Turkish police, Erdoğan asked, "Which European country tolerates assailants who shoot police officers?" referring to those who criticize using force against protesters. "If anyone plans an operation over me, they will find the nation in front of them. I wonder what other country in Europe can tolerate protest in the name of vandalism, attacking, shedding blood," Erdoğan said.

Erdoğan stated that Turkey was an integral part of Europe, and racist attacks in Europe would be curbed with the participation of Turkey in the European Union. "European political problems will not be solved by using Turkey, but by including Turkey," he added.

Referring to the German magazine that told Erdoğan to "Go to hell," the prime minister said, "It was showing me the way to hell, as if they know the path to hell." "Who can recklessly call us a dictator, while with reforms, democratic rights and freedoms standards have been improved.

Perhaps in Germany, "Go to hell Erdoğan" style news appears so seldom, once a year. But in Turkey every day dozens of newspaper headlines lay out that type of unethical news overtly; who can claim that media is under pressure in Turkey?" added Erdoğan.

Referring to different protesting groups outside the arena Erdoğan said: "The protesters outside are also our brothers. We will leave here with grace and dignity, without being provoked and will preserve our fraternity at any cost."

Certain media outlets and protestors displayed rage against Erdoğan's messages during his rally. The German daily Bild wrote an open letter to Erdoğan and said: "Erdoğan, you are not welcome here! We do not want politicians like you!" German police also detained certain protesters that demonstrated against Erdoğan. German police said that the protests proceeded in a peaceful manner ahead of Prime Minister Erdoğan's address on Saturday at Lanxess Arena. In a written statement, police mentioned that from time to time they intervened with protesters when they resorted to extreme acts. Four members of the far-right nationalist group Pro NRW were taken into custody for vandalism and bodily injuries. One person was detained over carrying placards that depicted Erdoğan's image with National Socialism references, and German police detained four people when they interrupted Erdoğan's convoy car near Ottoplatz Square.

Foreign Minister Ahmet Davutoğlu remarked on Erdoğan's Cologne visit and stated that Turkey and Germany are two friendly and allied countries, and their relations will not be affected by the conjuncture.