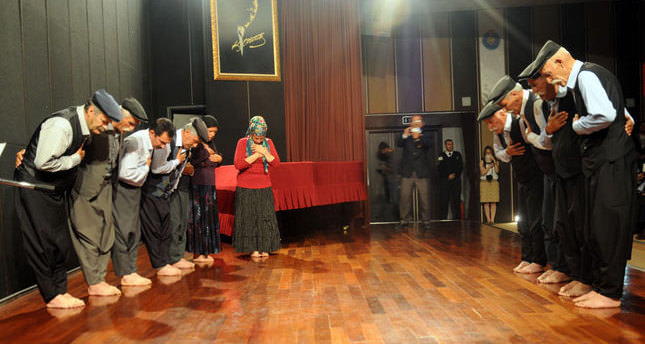 ISTANBUL — On his way back to Turkey following a trip to Cologne, Germany where he addressed over 10,000 Turkish people living in the country, Prime Minister Recep Tayyip Erdoğan commented on the current unrest involving some of Turkey's Alevi population and spoke about the government's agenda concerning the Gülen Movement, which is accused of infiltrating state institutions. Noting that the government currently has plans to resolve all disputes regarding Alevis in Turkey, the prime minister stated that they are preparing to hold meetings with Alevi leaders but noted they are sorry to see that the leaders do not seem to have a determined stance and that such a determined stance has the potential to positively influence people. Erdoğan also touched upon the fact that there is no uniformity among Alevis in Turkey and numerous groups who want to create unrest amongst them.

"The situation of Alevis in Turkey is much different," said Erdoğan, who noted that the Alevi population in Germany vote primarily for main opposition Republican People's Party (CHP), with the AK Party coming in second.

Erdoğan stated that relevant ministries are conducting workshops to address the problems of Alevis and noted it is crucial for Alevi citizens and leaders to show a clear stance against illegal terrorist organizations that want to associate themselves with the Alevi community. "We should not allow them the exploit people's religious beliefs," said Erdoğan, who added that he is comfortable with the idea of discussing problems with religious minorities and noted it is crucial for both sides to understand and listen to one another. For instance cemevleri, which are religious houses of worship for Alevis, are supported by municipalities. Erdoğan explained that while some people demand the government build and maintain them, "The government does not build mosques." Erdoğan added that municipalities provide various types of assistance in terms of the designation of land and property but there were issues with Turkey's Directorate of Religious Affairs, which recognizes Alevis as Muslims but does not officially differentiate between them and other Muslims in the country. "Since Alevis claim they are Muslim, it is necessary to do the groundwork to distinguish them from the rest of the Muslims," said Erdoğan, who touched upon the fact that some have called for the dissolution of the Directorate of Religious Affairs, which he claimed was unacceptable because it is an institution established under the country's constitution.

On a separate matter, Erdoğan also claimed that the Gulen Movement was behind the recent atmosphere of division factionalizing Turkey's religious minorities, despite the fact that they claim to promote dialogue among different religions. Erdoğan said many senior members of the movement are fleeing to different countries as investigations are getting underway. "There are two strong bases of this movement, one of which is the judiciary and the other is the security forces," said Erdoğan, who promised to purge state institutions of anyone who pays allegiance to non-state actors and explained the investigation period has been planned but the exact dates cannot be announced as of now while reiterating that the movement posed an imminent threat to national security and the future of Turkey.

In response to Erdoğan's remarks about Alevis, Lawyer and President of the Universal Alevi Bektaşi Association Ali İhsan Şahin said in an interview with Daily Sabah that it is crucial for the government to draw a clear line between genuine Alevis and others who claim to be Alevi but have no recognizable connection with the religion. "This group consists of numerous Marxist/ Atheist organizations that supposedly placed Alevi people as their presidents and exploit religious sentiment," said Şahin. He also said the Kurdish issue seems to have settled into a resolution and now certain forces are trying to bring forward Alevis as an issue and said the government's efforts seemed sincere. On the other hand, Şahin touched upon the positive developments about Alevis in Turkey and noted the number of cemevis in the country has increased, while there is more freedom for Alevis and Madımak Hotel, where a number of Alevis were killed in 1993, is now a museum. "There is serious progress although it is still not enough," said Şahin, who remarked that it is crucial for the Directorate of Religious Affairs to be restructured in a way to include Alevis and give official recognition to cemevis in order for their staff to receive funding from the budget in a similar manner to those who work at the mosques. "The government should continue to embrace everyone and have a peaceful attitude," said Şahin, who called on all parties to remain calm and peaceful at a time when Alevi youth are being provoked to take part in attacks in efforts to create a second instance of Gezi Park.

Alevis are a religious group within Islam combining elements of Sufism and it is estimated there are 10 million to 20 million Alevis in Turkey. They follow the Prophet Muhammad, his family, 12 imams as well as Haji Bektaş-ı Veli, a Sufi saint and follower of Ali ibn Abu Talib, the cousin and son-in-law of Prophet Muhammad. Their houses of worship are known as cemevis.
Last Update: May 27, 2014 2:18 am
RELATED TOPICS